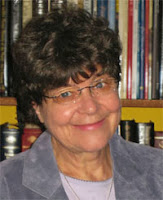 Berit Kjos is a self-appointed expert on mental health (and pretty much everything else). She runs Kjos Ministries and the website crossroads.to, and has written extensively on brainwashing in the US, lamenting the fact that “few dare call it conspiracy,” which, at least, is precisely what it is.

In her own words “[t]he word ‘brainwashing’ refers to a planned, step-by-step attempt to ‘wash’ family-taught beliefs from the minds of those who oppose government ideology. In America, it would mean replacing the old Biblical values and world view with a new way of thinking that would support a totalitarian agenda. In other words, every child must become a peace child, a willing and active servant of a new world order.” Apparently it is all the fault of Al Gore and the UN’s Agenda 21, who learned their techniques from the Nazi government and the Soviet Union. The conspiracy “also includes numerous foundations, environmental groups, educational institutions, and media and corporate giants such as the European Broadcasting Union (EBU), Princeton University Centre of International Studies, Columbia University Department of Religion,  Mystic Fire Video, Apple Computer, Sun Microsystems, The Image Bank, Bell Labs, Robert Muller, Noel Brown, Federico Mayor, Nafis Sadik, Maurice and Hanne Strong, Gro Harlem Brundtland (Head of The World Health Organization), the Dalai Lama, and movie moguls Bernardo Bertolucci and Martin Scorsese.” (George Lucas and the radical leftist propaganda movies Star Wars are apparently part of the agenda as well). And instead of being founded on the “unchanging truths” of Biblical values, “[t]he masses would be controlled through the Hegelian dialectic (consensus) process by globalist leaders who would view the world through the new filter of globalism,” asserted in that kind of deadpan manner that would suggest that she actually thought it made sense.

Kjos is also a vocal critic of Harry Potter, focusing in particular on its subversive influence on children and how it furthers the UN agenda. When the character Dumbledore was outed as gay, she said “[m]y first response was, ‘Thank you, Lord,’ because this helps us show others that these books should not be used in the churches to illustrate Christianity. Because Dumbledore has been revealed as a homosexual, it helps me communicate my message. It helps Christians who are concerned about the use of Harry Potter books in churches, because it makes it very clear that these books are not intended to be Christian, that Rowling isn’t speaking as a Christian. She has introduced values that are contrary to the Biblical message.”

But of course, this is just the beginning. Here is her chief editor Carl Teichrib examining Freemasonry, and we all know where he is going to end up. And apparently World War II was, from the start, aconspiracy to create the UN. In light of this piece of information it is hardly surprising to find her ministry (one Douglas J. Hagmann) claiming that Ambassador Stevens’s death in Libya was planned by Obama for some somewhat unclear purpose. It is probably unnecessary to mention what Kjos thinks about Dungeons and Dragons, but if you really want to know you can read it yourself (highlight: ”The ancient message behind role-playing magic”). She didn’t like the movie Avatar either, and her relationship with anime is highly problematic (covered in some detail here). FSTDT has collected an impressive array of quotes from the Kjos ministries pages, especially the forum boards.

Apparently the government, which is obviously persecuting Christians, is already creating concentration camps for Christians (at least according to one Teresa Morris writing for the crossroads webpage). There isn’t the faintest shred of anything resembling documentation, of course, but it is a nice illustration of the rampant martyr complex feeding these kinds of groups.

Diagnosis: The combination of Taliban style religious fundamentalism and hardcore conspiracy lunacy is always lovely, and it is rather unlikely that Kjos and her ministry will ever sustain much of a general impact.
Posted by G.D. at 10:53 AM