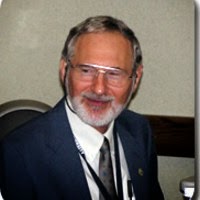 Baraminology is the shining star of cargo cult science. Its purpose is to provide an alternative to Linnaean taxonomy and cladistics based on Biblically literal young Earth creationism, in order to solve the rather obvious literalist problem of how Noah could have fit two (or seven) of every kind of animal on the Ark – the estimated 10 million + species of today could hardly have fit on any boat, so baraminology attempts to redefine the meaning of the word “kind” in Genesis to mean a much wider group (a baramin) to reduce the number of animals Noah would have had to take. The failure of the discipline (if assessed as a scientific enterprise) is of course spectacular, but falsification, contradictions and total lack of evidence has never stopped a pseudoscientist.

The baraminologists out there are numerous. The discipline was introduced in the 1940s, but revived in the 1990s by Kurt Wise and Walter ReMine. Roger W. Sanders is probably a minor figure in the discipline, but he is at least notable for having (unintentionally) provided one of the most apts summaries of the discipline, in his paper “A Quick Method for Developing a Cognitum System Exemplified Using Flowering Plants” on classifying placing plants into baramins: “The cognita are not based on explicit or implicit comparisons of characters or biometric distance measures but on the gestalt of the plants and the classification response it elicits in humans.” In other words: dismiss all that measurement and analysis stuff and follow your gut.

Some of Sanders’s, uh, research has also had the honor of being published in Answer in Genesis’s house journal Answers; vol. 1 saw the publication of “Toward a Practical Theology of Peer Review”, which he coauthored with Kurt Wise, Joseph W. Francis, and Todd Wood, and which raised criticism, based on Christian concerns, of the peer review process. Makes sense, really – most “real” peer review don’t accept just making things up while thinking of Jerusalem.

Diagnosis: Angry snowflake. Probably not influential enough to be seriously dangerous by himself, but he still contributes to the rather substantial effort on behalf of antiscience.
Posted by G.D. at 1:02 PM