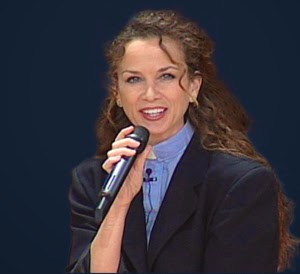 Melissa Scott is the widow and heir of the now deceased Gene Scott, subject of the 80s documentary God’s Angry Man, and has mostly inherited Gene’s depravity, lack of moral character, and zeal, though she has removed much of the pseudo-history, demonology, musings about Atlantis, Herbert Armstrong stuff, aliens and so forth from Scott’s website. She is nevertheless also the current boss of the University Cathedral, best known for its radio broadcast sermons and hamfisted fundraising, though she has not managed to maintain her husband’s audiences, and his empire is currently a fundie moneymaker in serious decline – the choice of Melissa as his successor was apparently not popular with all of Gene’s fans, as shown by this not entirely sanity-anchored rant by one Steve McHenry.

There is, even in the absence of much of Gene’s incoherent New Age drivel, enough lunacy left to qualify Melissa Scott for inclusion in our Encyclopedia many times over. Indeed, the inecessant money-raising schemes should really be sufficient on their own, but Melissa Scott is also a staunch opponent of the theory of evolution – apparently “evolution is something that is easy to swallow because it’s a simple solution to a complex universe and complex people. But the fact of the matter is, if you take the time to read your Bible and study your Bible you have to come to the conclusion that it can’t be,” whereupon she offers this piece of amazing gibberish (see if you can make sense of it).

Diagnosis: Though compared to the batshit, lunatic ravings of her husband, Melissa Scott’s brand of evangelicism seems rather middle of the road, she is still a batshit crazy fundie. Fortunately Gene’s empire seems to be rapidly crumbling, but there is still some punches against civilization and sanity left in it. Continue to maintain a safe distance.
Posted by G.D. at 8:17 AM