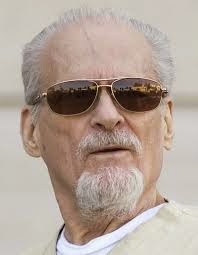 Well, this one is pretty obvious, but we couldn’t very well leave him out, could we? Tony Alamo is an American cult leader and figure at the unhinged end Christian right, known to many by virtue of their tendency to leave their literature, mostly insane anti-Catholic and anti-American government rants (“Did you know that the Pope and Ronald Reagan are a couple of Anti-Christ Devils and that they are selling us all down the drain?”), on car windshields across America.

Alamo himself has an impressive criminal record, and a multitude of former cult members have leveled charges against him (particularly rape charges), including reports that he has had as many as seven “wives”, whom he married when they were still children. Indeed, Alamo claims that women are the property of men, and that once a girl reaches puberty she needs to marry and begin having children. God told him that. God may also be the source of his information that 9/11, the Kennedy assassination and Pearl Harbor were inside jobs (that is, caused by Satan, who is the guy really in charge). When his wife Susan died of cancer, Alamo tried to raise her from the dead by keeping her on display for six months with members of his “church” praying around it (the story actually gets a bit bizarre after that). Apparently God wasn’t really forthcoming on that occasion.

The congregation use to live in a compound in rural Arkansas, though it was raided by Federal agents in September 2008 after reports of child sexual abuse. Soon after Alamo himself was arrested and being charged with multiple crimes involving child sexual abuse and transporting minors across state lines for those purposes. Alamo's response has simply been to declare that everything he has done is OK, since it was done in the Bible. Which may be correct.

He is presently serving a Life sentence, and the cult has probably come to an end, though it is a bit difficult to determine for sure.

Diagnosis: Probably neutralized, though one suspects that there are plenty of similar monsters out there ready to take his place.
Posted by G.D. at 11:12 AM