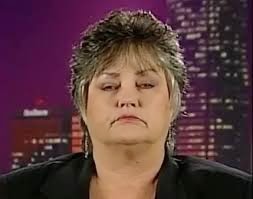 Zeeda Andrews was one of the people who organized the October 2013 trucker protest in DC, the one that was supposed to initiate the overthrow of Obama, by having the truckers circle the Beltway and arrest members of Congress for their supposed ‘treason’ (according to participant Earl Conlin), but which unsurprisingly completely fizzled. Andrews is, not unexpectedly, something of a character. She’s a birther (of course), a 9/11 truther, Boston Bombing truther, and seems to believe that the government is pumping aluminum into the atmosphere in order to block the sun’s rays (presumably as part of some kind of liberal global warming conspiracy).

But that’s just the beginning. According to Andrews “[t]he fact that these soldiers were set up to die in a no return operation is obvious they had knowledge that Obama didn’t want leaked. This is the Seals that killed Osama Bin Laden. I don’t believe this story. He is alive call me crazy [you’re welcome] but, Osama Bin Laden is our President Obama do your research. The CIA has been preparing for this since he was a boy. They have same height, bone structure, hands and ears both are left handed the Osama face was created by Hollywood. The fox is in the hen house.”

Yes, Obama really is Osama bin Laden, and he was trained by the CIA to rule the US in a nefarious plot to accomplish some pretty nebulous goal.

There are also chemtrails and HAARP, and apparently – just prior to her own trucker campaign –a million bikers invaded DC a to overthrow Obama and may have been successful – things get a bit unhinged toward the end of her rant and it’s a bit tricky to follow. She is also a fan of David Icke and his claim that a secret race of lizard people is really running the world. As you’d expect, Andrews was, in turn, heavily promoted by Glenn Beck and Fox News.

Diagnosis: Perceptively enough, she encourages people to call her “crazy,” and we see no option but to oblige.
Posted by G.D. at 11:57 AM