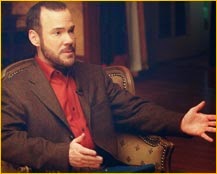 George Anderson is a former switchboard operator who at one point switched to a career as a medium. As a medium he has, indeed, experienced a modicum of success with books like We Don’t Die, We Are Not Forgotten, Our Children Forever and Lessons from the Light: Extraordinary Messages of Comfort and Hope from the Other Side and so on. The books provide self-help tips and vague, comforting messages targeted in particular at people in difficult life situations, but no evidence of actual psychic abilities or the existence of an afterlife. He has also had his own ABC special featuring celebrities who wanted to contact the dead, and his readings and channelings come across as helplessly inane to those who know the first things about how cold readings, subjective validation, and confirmation bias work. Unfortunately, Anderson’s target audience does not.

Indeed, Anderson’s sessions have been noted as being so helplessly inane that it may strike one as suprising how even convinced fans could ever believe that he had any special powers whatsoever; a good description (and a recording of a whole session) can be found here (but cognitive biases are powerful stuff). According to himself “[r]esearchers in the field of science, afterlife studies and spirituality [interesting mix] have called George ‘Astonishing,’ ‘The Gold Standard by which all mediums are measured,’ and ‘A Stradivarius among mediums.’”

Diagnosis: Once again, it is pretty hard to believe that Anderson is being entirely honest; insofar as he is, he sure has a rare ability to reinterpret overwhelming evidence that he has no psychic abilities as evidence that he does. The fact that he is promoted the way he is by people who really should know better, is more along the lines of disgusting.
Posted by G.D. at 10:32 AM