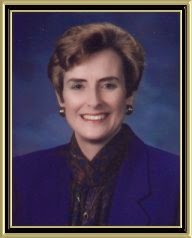 Virginia Armstrong is the national chair of Phyllis Schlafly’s Eagle Forum. Armstrong is, accordingly, a seriously hardcore loon. According to Armstrong, America is locked in “the deadly struggle between the Humanistic worldview and the Judeo-Christian worldview,” and she elects to proudly carry the torch for the third side of delusional fundie insanity. Why “deadly”? Well, Armstrong blamed the 2007 Virginia Tech shootings, for instance, as “among the “graphic results of America's Culture War”. More precisely,  she blamed “activist/liberal federal judges” who “have long been fighting to expunge every vestige of God from our nation's classrooms and public life;” moreover, the “teaching of evolutionism” leads to “youths behav[ing] like animals” and reproductive choice leads to “our youths conclude that they, too, have the right to kill the children around them.” In conclusion, “[w]e rightly grieve over the losses of Columbine High School, Virginia Tech, and the abortion chambers still spewing out cauldrons of innocent American blood. We should also grieve over a major cause – America's activist/liberal federal judges who have sown the wind, while our children reap the whirlwind. Surely it is time for us to CURB THE COURTS and reclaim our children and our country.” The facts be damned: America is going to hell, regardless of the fact any reasonable parameter of measurement actually suggests the opposite.

Right. I don’t like linking to their websites, but her own “Constitutionalist Manifesto” must also be seen to be believed. While professing to like the Constitution she clearly has no idea how it is supposed to work.

According to her bio, she holds “the” Ph.D in political science and public law. She never says from where.

Diagnosis: Zeal, ardent fundamentalism, and a complete, well-demonstrated lack of how science, society or reality actually work. There seems to be a competition among certain segments of the religious right to be as dumb, uninformed, and critical thinking-challenged as possible. As such, Armstrong has made a pretty strong case for herself.
Posted by G.D. at 10:36 AM