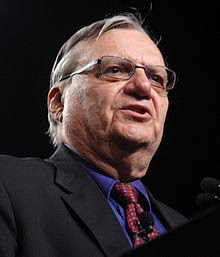 Joe Arpaio is the wingnut sheriff of Maricopa County, Arizona, an office nominally designated as an agency for upholding the law, rather than what Arpaio personally thinks should be the law (no, he does not seem to be aware of the difference). Or as Balko aptly described him: “a power-mad, office-abusing sheriff who has misspent millions in taxpayer funds, and who once let a celebrity drive a damned tank into a man’s home (on suspicion of cockfighting, no less).” Fortune, however, placed Arpaio on the other side of the bar, to the dismay and horror of anyone even minimally civilized.

For instance, Arpaio has taken a very hard line against illegal immigration. Indeed, he declines to hand illegal immigrants over to federal authorities for deportation (instead jailing them), and the office has been so busy hunting illegal immigrants that nothing else has really received much attention (including over 400 sexual assault cases, most of which involve children, whichhe didn’t bother to look into – indeed, the sheriff’s office readily admitted that they didn’t care). In the end (May 2012), the Justice Department filed a civil suit against Arpaio in Federal court due to multiple civil rights violations primarily aimed at the Latino population of Maricopa County (a brief summary of his civil rights violations is here); and yes, the conclusion was, unsurprisingly, that Arpaio has engaged in systematic discrimination against Latino residents of his county (and he did, eventually, receive a mild slap on his wrist). But then again, Arpaio doesn’t really believe in civil rights, at least not free speech, and at least not when it is used to criticize him (which he does think constitutes violation of his civil rights). And yes, he is still a racist – and still a hero of the Western conservatives – those things are, frankly, not unrelated.

Arpaio also uses the sheriff's office, including its official communication organs, as self-promotion tools, including the publication of his political differences with the federal government and of his opinions on Arizona political happenings; he also sells prison equipment (especially those indicative of his own dubious civil rights track record) as souvenirs through an outfit called the Posse Foundation, once again with funding from the sheriff’s office.

But Arpaio is by far most famous for his birther activism – indeed, he may probably be said to be the leading birther activist in the US after assuming the mantle from Orly Taitz following the latter’s repeated crashes and burns (not that any of them has stopped her), and making the WND all giddy in the process. In particular, Arpaio argues, partially on the grounds of info – incoherent rants – he obtained from Taitz, that President Obama’s birth certificate and selective service (draft) registration card are fakes. His volunteer “Cold Case Posse” conducted an “investigation” together with Jerome Corsi – Arpaio was baffled and angry that no one but the WND seemed to pay much attention – and then held an impressively long press conference to announce their findings: the documents are fraudulent and Obama was probably born abroad and is not eligible to be President (who would have expected that outcome from their fair and unbiased investigations). Their evidence was heavily dependent on the idea that the birth certificate’s electronic form, as released online by the White House, differed from a “control” sample certificate that they scanned themselves. Suffice to say that few people not already committed to the birther cause were impressed. On the other hand, Tea Party intellectual strategist Judson Phillips actually seemed to believe that Arpaio’s “findings” would lead to criminal charges against Obama. More interestingly, the man in charge of running Arizona’s elections, Secretary of State Ken Bennett, claimed he became unsure whether Barack Obama was really born in the United States after Arpaio’s revelations, and threatened to keep the president off the ballot for the 2012 election. No Ken: no one actually believes that you came to those conclusions based on Arpaio’s research.

But Arpaio wasn’t done, and with Zullo he made another ridiculous attempt in July 2012, adding the claim that super-secret codes were hidden in the birth certificate and that some very old person (not present at the press conference) was the only one who could figure out what those codes actually meant. They also asserted that Hawaiian police were following Zullo around to harass him during his “investigation” (meanwhile the above-mentioned civil lawsuit against Arpaio was going on, but that was of course completely unrelated). Zullo, on his side, has continued to present his “evidence” at various venues, including the Constitutional Sheriffs and Peace Officers Association convention, where Rep. Steve Stockman (R-Texas), attended and was, according to Zullo, “deeply concerned about it and he really does want to have a lengthy, lengthy discussion about this.” In December 2013, the WND once again promised a “universe-shattering” birther revelation in the near future – Zullo was “unable to reveal details at the moment,” but it would be “beyond the pale of anything you could imagine”. Let us predict it will be the same nebulous tripe as every time before, shall we? (We haven’t heard much new since that article, at least.) Arpaio, on his side, was apparently too busy making “progress” on the investgations to run for the office of governor of Arizona – he has even teamed up with Larry Klayman. The Obama administration, being afraid of his investigation, was at the same time intentionally sending minors from Central America to his home county as a personal “affront” to his notorious anti-immigrant activism. “The White House is incompetent and the dumping of illegals is intentional,” he said.

In early 2013, after the Sandy Hook shootings, Arpaio announced he would form an all volunteer posse of “well trained”, gun-carrying patrols to drive around town and protect the schools. In early February 2013 it was predictably discovered that his posse included at least one convicted child molester, and several men convicted of domestic abuse. The training was given by criminal justice expert Steven Seagal, whose qualifications include “hundreds of thousands if not millions of hours into my weapons training.”

Arpaio is due to face a contempt hearing in April 2015 over his repeated failure to comply with previous court orders in the ongoing court case involving his blatant violation of the civil rights of suspects and prisoners. We are looking forward to it.

Diagnosis: Racist, fascist, old-fashioned conspiracy theorist. That he ends up being the one who nominally defends the law in Maripose County unfortunately tells you more than a little about the residents of that county.
Posted by G.D. at 11:31 AM