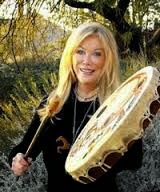 According to her website (the link is not to her website), Lynn Andrews “is a New York Times and internationally best-selling author of the Medicine Woman Series, which chronicles her three decades of study and work with shaman healers on four continents. Her study of the way of the sacred feminine began with Agnes Whistling Elk and Ruby Plenty Chiefs, Native American healers in northern Canada. Her quest for spiritual discovery continued with a Shaman Curendera of the Mayan Yucatan; an Aboriginal woman of high degree in the Australian Outback or Nepalese healer in the foothills of the Himalayas. Today, she is recognized worldwide as a leader in the fields of spiritual healing and personal empowerment. A shaman healer and mystic, Ms. Andrews is widely acknowledged as a major link between the ancient world of shamanism and modern societies [sic] thirst for profound personal healing and a deeper understanding of the pathway to enlightenment.”

How, you might wonder, did this Beverly Hills-bred snowflake achieve such intimate relations with spiritual leaders and healers of indigenous peoples on several continents to share their tribal traditions about the “sacred feminine”? And why did they continue to do so even after Andrews demonstrated, again and again, that she had absolutely no understanding or respect for their tradition, instead seeking to utilize the authority of ancient wisdom for her particular brand of esoteric New Age woo? Well, it is worth noting that she offers little by way of evidence to back up the claims, at least. No wonder why; it's all so secretive. Like with her claims to be “initiated as a member of the Sisterhood of the Shields, 44 women who are healers from cultures as diverse as Panama, Guatemala, Australia, Nepal, North America and the Yucatan. Remaining hidden, the Sisterhood has appointed Ms. Andrews as their public messenger.” She offers no evidence for the existence of such a group (they’re hidden, don’t you know), whose existence would contradict everything characteristic of each of these diverse indigenous culture.

But Andrews has hit upon what is a sure-fire formula for success in certain segments of the population: appealing to miracles and esoteric traditions magically opened to a select few who let them partake in on the secrets of life to sell a bland, generic and streamlined postcard packaging of indigenous traditions. In short, Andrews is one of today’s leading plastic shamans. Congratulations.

Of course, real native Americans are not particularly impressed with how Andrews is “is making a joke out of our spirituality and Native culture,” (Flora Zaharia) or about Andrews’ writings, which have “nothing to do with Indians. It’s about what white people think Indians should be.” (Vine Deloria)

Currently Andrews is apparently running a Mystery School to share her wisdom with bored middleclass people willing to pay a lot of money for bullshit.

Diagnosis: What do you call someone who is deeply fascinated with the exotic others, claims to have finally won the respect of these others and learned from them, and then market a stereotyped version of a generic representation of their cultures as New Age mysticism?
Posted by G.D. at 9:37 AM