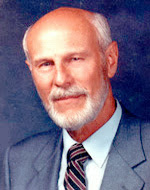 Dave Hunt is a Christian apologist, speaker, radio commentator and author. In fact, he seems to be a fairly popular writer, with his books on theology, prophecy, cults, and other religions, including critiques of Catholicism, Islam, Mormonism, and Calvinism, among others. Jack Chick is an avowed fan of Hunt, as are the people at RaptureReady, and that should sort of indicate where in the fringes of the looniverse Hunt is located. Officially, he is an evangelical dispensationalist, and he is associated with the Plymouth Brethren movement.

As you might have inferred, Hunt is a hardcore Biblical Creationist, and much of his writings (e.g. his newest book Cosmos, Creator, and Human Destiny, reviewed here) and radio programs (“Search the Scripturs Daily”, “According to God’s Word”) are concerned with rather confused attempts to refute evolution. “I think that you would have to be, in my opinion, an idiot to think that this universe happened by chance,” says Hunt, and that’s pretty much the best he can come up with insofar as he lacks even cursory knowledge of the fields he attempts to criticize.

He is also convinced that occult or pagan influences are pervasive in modern culture; evolution is one form of occult paganism, according to Hunt, but so are all forms of psychology and most forms of entertainment, in particular and without exception science-fiction or fantasy – Hunt is a longterm and quixotic critic of Harry Potter (there is an excerpt from a video he made with Caryl Matrisciana here; quote-mining, anyone?). He is also scared shitless about the occultims of yoga and environmental concerns or conservation, which he of course vehemently opposes. And he is rabidly opposed to public education. After all, you don’t need much education to realize that Hunt is quite rabidly deranged and insane, and thus undermine his efforts. His book Occult Invasion is in particular dedicated to this topic.

He is probably most famous, however, for The Seduction of Christianity (with Tom McMahon), published in the 80s, which categorized Word of Faith teachings, meditation, and psychology-based counseling as New Age heresies.

Diagnosis: A completely deranged individual. His level of influence is a little unclear, but he has sold quite a few books that no-one can read for enlightenment without being a full-blown loon.
Posted by G.D. at 10:27 AM