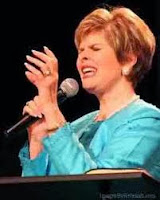 Cindy Jacobs is one of the most deranged people to walk the face of the Earth. She is a self-described “respected prophet”, missionary TV show host (“God Knows”), exorcist, and generally associated with the New Apostolic Reformation. Her views on life, the world, and politics is framed by a hardcore fundamentalist dominionism that would make the Taliban look conciliatory, which she couples with absolute delusions of grandeur and unmitigated bigotry. Her show is dedicated to discussing how lands are cursed by sins like abortion, adultery and homosexuality (God is apparently planning “a whole lot of shaking” to punish America for gay marriage decisions), calling on Christians to literally take control over the weather and reverse the curse, and similar matters. For some “common-sense” advice on how to deal with demons, watch this.

To give an impression of how Jacobs thinks the world hangs together, here is Jacobs claiming that the lands of Texas are cursed with violence because they were previously inhabited by Native Americans who “did blood sacrifice” and “were cannibals and they ate people.” Fortunately Rick Perry’s The Response prayer rally in Houston broke the curse and “the land is starting to rejoice, you see, because of that prayer” (here is a more in-depth explanation of the kind of phenomenon she has in mind). Later she demanded that those with American/Indigenous heritage must renounce and repent for their ancestor’s sins, since that’s the kind of person she is. In Jacobs’s world God also sent prophets to Germany before the war to warn the Jewish population of the Holocaust, implying that if they didn’t manage to escape it must have been because they were unwilling to listen.

She has also plead the government to ban abortions because it “curses the land”. You want proof? In 2011 there were a couple of cases of large flocks of birds dying in some US states. Jacobs immediately perceived the reason: the repeal of “don’t ask, don’t tell” made God send us a message (also here). It is a little unclear why God would warn us by randomly killing birds in Arkansas (there is no evidence that these were gay birds), but to a mind like Jacobs everything can mean whatever she wants it to mean. The DC earthquake in August 2011 was, however, a sign from God to share the Gospel. And here, husband Mike Jacobs points out that we are seeing natural disasters “because sin has reached Biblical proportion” (they didn’t exist before, apparently). With these scary and rather urgent warnings in mind, I suppose we ought to listen to Cindy Jacobs’s prophecy that God will ensure a nuclear catastrophe if American politicians “keep trying to divide Israel”. Here she explains how prophecies work and how she can know that something is a real prophecy, and she explains it – remarkably – without expressing a single coherent thought.

Apparently the fact that America is cursed is currently the responsibility of liberals and secularists. For instance, according to Jacobs there existed no problems in American schools before 1962, when school-organized prayers were ruled unconstitutional. That’s when the SAT scores started to drop, in Jacobs’s mind, and the end of school-organized prayer led to “every evil thing” in America today. Her husband Mike, who co-hosts the programs, chimed in pointing out that a “recent meeting of prophets” decided that the European Union’s current “fiscal hardships” are a result of the fact that “they refused to acknowledge God.” What more proof do you need (besides the curious lack of correspondence between levels religiosity and levels of financial hardships)? Oh, and it is apparently not only the prayers; the public education system in the US has Satanic origins because John Dewey, who led the development of progressive education, was a signatory to the Humanist Manifesto.

2012 caught her working hard to affect the outcome of the election, calling for half a million prayer warriors (through her United States Reformation Prayer Network (USRPN)) to make sure Republicans got elected by praying about it. One of the reasons they need to fight the current government is that, according to information that only USRPN subscribers have received, health care reform legislation apparently requires everyone to get an RFID chip implanted in their finger in order to receive health care. She has earlier prophecied that God is going to “sweep judicial activism” out of America’s courts, which is, I suppose, an example of a fractally wrong (http://rationalwiki.org/wiki/Fractal_wrongness) message. She also asked her followers to pray for the destruction of the separation of church and state. Here is Cindy Jacobs, being apparently dimly aware that some of her political suggestions may be controversial, trying to explain why even environmentalists are dominionists by rather feebly trying to redefine words.

She is not only a prophet, however. You can see Cindy and Mike hosting Rebecca Greenwood (another leading figure in the New Apostolic Reformation) to discuss ways to cast demons out of people who have looked at pornography here. Like Bryan Fischer, Mike blamed incidents of oral sex today on President Bill Clinton, saying that Clinton helped bring about “an outpouring of demonic into our nation” as “kids started having sex parties where they were having oral sex,” because Clinton “took it out of the dimension of being wrong.” Expanding on the issue, Mike also attempted to argue that sexual immorality is “like putting the wrong fuel into your car,” leading to all sorts of “breakdowns” in your “physical body”, though he didn’t really list the DOIs of the studies from which he gathered the information.

And if you ever doubted Cindy Jacobs’s powers, keep in mind that, entirely according to herself, she has actually prevented two African coups through prayer. In fact, she also helped capture Noriega by the same means, and she asserts, loudly and clearly, that she can pray – and has prayed – away terrorists. Heck, she even has the power to raise dead children (though apparently only when no one is watching). Her prayers can also cure insanity, and once she even saved David Barton’s life – she prayed (God told her to; apparently he couldn’t intervene without Jacobs’s prayers) that the wheels on his car wouldn’t fall off during a trip, and they didn’t! She has even claimed that she and her prayer warriors are responsible for saving the global economy (yes, she really has lost sight of the distinction between herself and God – and she does indeed think that she is repeatedly saving the world with her prayers).

She also saw the Boston bombings coming, but didn’t clearly express that until after the event. In this case, however, apparently her prayers must have failed to prevent it – unless, of course, she chose not to pray in this particular case.

And keep in mind that she comes from a long line of prophets. The prophecy genes run in her blood, and even her five-year old daughter is currently apparently able to stop tornadoes (also here).

God doesn’t only follow her biddings in the grand matters, though. He is also there to serve her in her daily life. He has helped her make travel arrangements, and miraculously multiplied the dinners she has cooked and the oil she has used, made a set of tires on her car and even made her a pair of shoes. He has also healed her broken cheekbones (evidence? they healed) and her own tumors (that Satan put there and didn’t let anyone but Jacobs know about them).

If you thought, however, that Jacobs was a fringe figure, you are wrong. Jacobs is a regular participant in many of the religiously themed events and rallies organized by various powerful wingnuts. Here, for instance, is Jacobs explaining how Satan is seeking to destroy God’s model for family and install tyranny at the Awakening Conference at Liberty University (which featured all the expected nutjobs, from Matt Staver and Rick Scarborough, to Lou Engle and Richard Land).

There is a decent Cindy Jacobs resource here.

Diagnosis: Hers is a rather impressive attempt to illustrate how far delusional extremism can be taken before you are reduced to a lonely blog on the Internet. Her insanity is almost complete – and she nevertheless enjoys quite a substantial following and influence. A thoroughly hideous, and scary, character.
Posted by G.D. at 12:28 PM