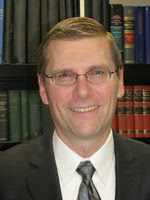 Rev. Dr. Nathan Jastram is a professor of theology at Concordia University (and their theological seminary, the Cranach Institute), and member of the Creation Science Society of Milwaukee. He is most notable for his work on the Dead Sea Scrolls, which he claims “demonstrate the extreme accuracy of the copying of Biblical manuscripts,” primarily because he wants them to be and uses motivated reasoning as his methodological principle to reach that conclusion. Indeed, as it is so candidly put on the Creation Science Society’s webpage, the results of his research are clearly “contrary to the assumptions of evolutionary scholars and others.” Clearly, this is an epic battle between those evil scientists and God.

His screeds (e.g. “Does it matter if you believe in evolution”) can also be heard at e.g. Christ-Centred Cross-focused Talk Radio.

Diagnosis: A fairly typical, lowkey proponent of crackpottery and denialism in the name of religion – and for the claim that religious commitments somehow validate confirmation bias as a research strategy.
Posted by G.D. at 12:39 PM