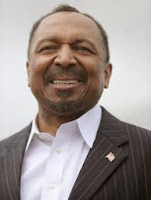 Now, this guy probably needs little introduction. Earl Walker Jackson was the batshit fundie running mate of already batshit fundie madman Ken Cuccinelli, bidding for the position Lieutenant Governor of Virginia – which they both promptly lost (“voter fraud” according to the usual suspects out on the fringes of the rightwing). Throughout the race Jackson remained a firm favorite the religious right for his strong opposition to civilization, decency, reason, humanity, science and reality – everything that, in the eyes of Jackson and his likes of mind, risks upsetting Baby Jesus.

His stance on social issues can perhaps be fairly summed up by his claim that “Democrats now have fully embraced an abortion policy that amounts to infanticide. They have also made the lesbian-homosexual-bisexual-transgender agenda their vision for America. How have they managed to hold on to black Christians in spite of an agenda worthy of the Antichrist?” Indeed, (and this one got him some attention) Jackson even made an ad accusing the Democratic Party of creating an “unholy alliance” between black civil rights leaders and Planned Parenthood. This “alliance” basically led Jackson to accuse the two groups of plotting to kill black babies through abortion, making them more harmful to the black community than the “KKK ever was” (a rather common trope at fanatic conspiracy websites such as RenewAmerica). In an interview with (fan) Peter LaBarbera Jackson also declared that gay rights is “killing black men by the thousands,” and indeed that gay rights and liberalism have killed more black people than the KKK and slavery combined: “we see young African American men contracting HIV at astonishing rates and yet it’s not talked about at all as a problem of homosexual behavior, that’s the astonishing thing” (he did back it up by exclaiming “now that’s a fact” at the end, though). Furthermore, gays and lesbians have “perverted” minds and are “very sick people psychologically, mentally and emotionally” – they are also bigoted against African Americans and Christians – Jackson doesn’t explain how, but presumably it is their very existence that constitutes bigotry because Jackson finds being gay offensive – and homosexuality, an “abomination” in the sight of God, “hurts black women”, “poisons culture, it destroys families, it destroys societies; it brings the judgment of God unlike very few things that we can think of.” Not only that: Gays also seek to “sexualize [children] at the earliest possible age” and use “totalitarian” tactics; there is a “direct link” between gays and pedophilia – and bestiality.

As practical measures against this tide of pagan liberalism Jackson has for instance called for GLSEN founder and anti-bullying activist Kevin Jennings, a “radical homosexual activist”, to be “imprisoned” (because, in part, Jennings is persecuting Jackson … just think about it). It should also be mentioned that Jackson has a long history of ardently combatting AIDS prevention efforts in Virginia – already in the 80s, for instance, Jackson would arrange candlelight vigils outside a local ABC affiliate, WCVB, demanding that the station pull sex education public-service advertisements that endorsed the use of condoms. If AIDS cannot be conquered through “abstinence only” then it presumably shouldn’t be combatted at all. Damn Democrats.

You can see him failing to grasping the idea of “logic” here.

Even from before his run for lieutenant governor Jackson was known for his Biblically inspired campaigns in favor of greed. “Money magnifies the character of an individual,” said Jackson, arguing that charity shouldn't go to the poor but instead upward, to the wealthy, since they are the “job creators”. In his book he even suggests – not particularly surprisingly – that giving your money directly to him if you start feeling a deep connection to God, and that doing so will convince God to let you “prosper”. He has also taken a firm stand against federal disaster relief since such relief turns government into God, the idea being presumably that disasters are God’s just punishment anyways and it would be very ungodly (playing God or questioning His judgment) to help the disaster victims.

That should of course have made him all set for the aforementioned run for lieutenant governor. As far as organizational experience goes, Jackson is the founder and current president of S.T.A.N.D. (Staying True To America’s National Destiny), which describes itself as “a national organization dedicated to preserving life, the traditional family and our Judeo-Christian history and values as the Foundation of our Constitution and culture,” and head pastor at Exodus Faith Ministries. And indeed Jackson, with his occasional slogan “a vote for me is a vote for the Glory of God” and rhetoric such as next to Jesus, America has been “the greatest blessing given to mankind”, managed to beat six other candidates, including experienced politicians, and it is hard to think that it doesn’t tell you quite a bit about the GOP voting base in Virginia – even though Jackson did end up losing the election by over ten percentage points.

During his campaigns he did admittedly make some feeble and bizarre efforts to alleviate the backlash of some of his previous statements (Rightwingwatch has a nice selection of them here, and ThinkProgress has an illuminating list of Jackson tweets here). Still, he would never apologize for his forays into hate speech because he “is a Christian”, and apologizing is apparently a very un-Christian thing. Later he tried to emphasize that “every one of those comments has a context and were spoken in my role as a minister, not as a candidate,” and that it was therefore unfair of the media to use it against his political campaign. Finally, he tried to argue – rather angrily – that using his past statements against him is persecution and amounts to a religious test for office and is therefore unconstitutional. So there.

Much of his campaign was directed at Obama, whom Jackson perceives to be a communist trying to set himself up as a dictator (evidence? Jackson disagrees with liberalism – what more evidence did you think he had?), and the Democrats (“the Democrat Party has shown itself to be anti-Christian, anti-Bible, anti-family, anti-life and anti-God”), lamenting the fact that the Tea Party had failed to gain support in African American communities – indeed, Jackson urged African Americans to “come out of that indoctrination, what I call a liberal plantation of psychological bondage” (which must count as one of the most bizarre uses of dog whistle phrases in a while). Similarly bizarre was his claim that Democrats are like “slave masters” who “have black conservatives punished” (by … disagreement and criticism, I suppose – exactly like slave owners). Here, by the way, is Jackson’s bizarre take on the Juan Williams situation.

He did, however, try to brush over his earlier claim (on Victoria Jackson’s show) that “the idea that Barack Obama is a Christian is laughable” and that Obama “is, at best, a confused man [and] is, at worst, has the sensibilities … of an atheists and a Muslim,” emphasizing that “we’re really dealing with an evil presence,” as well as the allegation that Obama “seems to have a lot of sympathy for even radical Islam” and “clearly has Muslim sensibilities,” and that Islam “seems to be his priority … Christianity, I don’t really think about that with him, I really don’t, that’s a joke” (Jackson also thought that Harry Reid was faking his Mormonism through some sort of elaborate conspiracy). But he did repeat a claim that Obama condones anti-semitism (Jackson’s evidence was primarily blatant lying) because he sympathizes with Islam.

Given these observation, why on Earth would God let Obama win in 2008? Apparently the question caused Jackson some intellectual struggle confusion before he settled for the hypothesis that God let Obama win (presumably by manipulating the voters’ free wills?) as a means to creating the Tea Party, whose role in the future of America is apparently going to be of epic proportions. I think psychologists have a name for reacting in this manner when a result turned out to be not in your favor.

He also claimed that Democratic Party supporters are campaigning against Christians, “insulting their faith and blaspheming their God,” by supporting a “coalition of the godless,” since they think “that the Bible is a lie and indeed they are saying that God is a liar.”

He even made the news when he attacked yoga (in his book Ten Commandments to an Extraordinary Life: Making Your Dreams Come True; excerpts here), claiming that yoga leaves its practitioners spiritually empty. Said emptiness, in turn, allows the devil to enter them, which – presumably – can turn you both gay and Muslim. The book also claimed that sin causes birth defects, citing “recent discoveries about the genetic code.”

Jackson also dismisses evolution, candidly pointing out that since chimpanzees can’t talk, it must be a sign they can’t evolve and therefore evolution is not real. Some biologists might suggest that his comments reveal a rather … cursory understanding of the theory, but a cursory understanding has never prevented a blathering fanatic from making bold and stupid assertions.

According to Tea Party Nation, however, “E.W. Jackson represents the future of the Conservative movement”.

Diagnosis: The conservative movement better hope that Jackson is not their future. It is nevertheless a bit scary, and rather illuminating, that a hysterical endtimes-style, incoherently babbling madman like this can achieve the kind of position he actually achieved. He is probably rather neutralized by now, but still!
Posted by G.D. at 2:16 PM