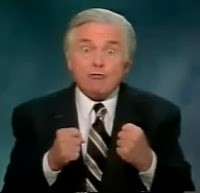 A.k.a. “The Walking Bible” (according to himself)

Jack van Impe is another biblical fundamentalist who runs a half-hour weekly TV show “Jack van Impe presents,” and who believes the end is nigh. In fact, he has predicted the end of the world on numerous occasions, and despite the miserable failures (e.g. the “seven year tribulation” sparked by the Y2K bug beginning in the year 2000, as asserted in his film 2000: Time Bomb) some people still seem to continue to listen to him. He was last seen going for the Mayan calendar end times of 2012, but I haven’t bothered to check out where he stands at present.

A typical show features his wife Rexella reading some recent news headlines, which Jack then interprets in light of apparently randomly chosen Bible verses, concluding that the end-times are near. Then he tries to push his DVD on you. Recurring topics on the show, in addition to end-times prophecies, include New World Order conspiracies, Chrislam, prophecies of future wars and the second coming of Jesus, differences between the biblical Jesus and the Jesus of Islam, radical Islam, the importance of doctrine, and criticism of people he doesn’t fancy, such as Barack Obama, Rick Warren, Robert Schuller, Joel Osteen, and Oprah Winfrey. He is on the record calling fellow televangelist Pat Robertson an “Osami [sic] bin Laden” for calling for the assassination of Venezuela's Hugo Chavez. In 2001, Jack Van Impe Ministries were awarded the parodic Ig Nobel Prize in Astrophysics for the assertion that “black holes fulfill all the technical requirements to be the location of Hell.” He has also calculated that the word “computers” adds up to the number of the Beast, and that the antichrist will use computers to keep track of people during the end times. He nevertheless maintains a website that his audience is encouraged to visit in order to buy stuff.

The end-times are supposed to happen as follows: A single world political leader (the beast) and a single world religious leader (the false prophet) will emerge (the emerging world religion is Chrislam), though the Rapture will happen before either leader comes to power. The world will be organized into 10 political subdivisions, based on the ten-district plan set upby the Club of Rome. The world political leader will “come in peaceably” and create a seven-year peace deal involving Israel, but three and a half years into the peace, Russia and its Middle Eastern allies will invade Israel (this one has generated a lot of incoherent confusion over at WND), and the military of Russia and its allies will be decimated. Then China will invade, and the military of China will likewise be decimated when Jesus returns.

Van Impe is also a “musician” and has released albums featuring himself playing the accordeon, but he remains critical of rock’n roll.

Diagnosis: Batshit maniac who has yet to display any evidence that he has any kind of cognitive connection to reality. His influence is probably limited, but he is nevertheless a rather well-known fellow, and it appears that some people may be listening to him.
Posted by G.D. at 11:06 AM