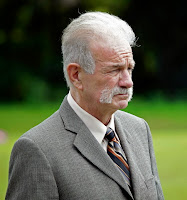 Terry Jones is probably a familiar name, but if you don’t remember Jones is a hardcore lunatic Christian pastor (currently based in Florida), who runs the “Dove World Outreach Center”, most famous for threatening to stage a mass burning of copies of the Qur'an to coincide with the anniversary of 9/11 attacks in 2010 – which he eventually carried out in March 2011 and later (he was arrested prior to 9/11, 2013). Jones may also be rather heavily involved in the creation of the September 2012 video that caused some serious international brouhaha. It is worth mentioning that he was expelled from Germany in 2009 for the way he was running a religious group over there (in addition to some financial issues).

Burning the Qur’an and inciting lunatic response from deranged fundamentalists, even if you know this is going to happen, is not enough to qualify as a loon, however (the often overlooked “ritual” part of the plan is a different matter, perhaps, and his idea that burning the Qu’ran was justly punishing Muslims for 9/11 is not quite obviously entirely coherent either). Even more obvious lunacy was displayed when he and his church hung an effigy of BarackObama in front of Dove World Outreach Center headquarters in 2012 for all of the usual batshit crazy reasons based on all the usual sorts of conspiracy nuttery. In short, say what you want about his Qur’an burning plans – Jones is a deeply deranged fellow.

Diagnosis: I suppose we had some kind of duty to mention Terry Jones. He is, indeed, quite insane; he is also relatively inconsiderate when it comes to preserving other people’s health and safety.
Posted by G.D. at 11:24 AM