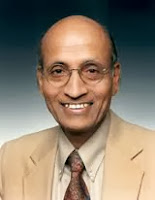 Vasant Dattatray Lad, who likes to call himself ‘Dr.’ even though his “education” is from unaccredited crackpot institutions, is an Indian-born author and leading “expert” on Ayurvedic medicine in the US (though its popularity is of course to blame on Deepak Chopra). Lad is director of the Ayurvedic Institute in Albuquerque, and teaches woo in both the US and India.

Now, Ayurvedic medicine is basically medicine based on the same mythical picture that Western medicine was based on in the Medieval age: regaining health is primarily a matter of balancing the humeurs – something that Lad more or less admits: “unlike modern allopathic drugs, Ayurvedic treatments are tailored to the specific constitution (prakruti) and imbalances (vikruti) of each individual person.” And to back up the claim? Appeal to ancient wisdom: “Ayurveda relies on its own pharmacological ‘database,’ recorded in ancient texts such as the Charaka Samhita,” which is apparently supposed to provide evidence over and above clinical testing. And which is exactly the same evidence blood letting was based on in Medieval Europe. In addition to the humeurs, there are of course the life forces; the chakras and the prana, what Western medieval alchemists called élan vital, all fully and completely based on theological musings instead of evidence.

His numerous books include Ayurveda: A Practical Guide: The Science of Self Healing, The Yoga of Herbs: An Ayurvedic Guide to Herbal Medicine (with David Frawley), Ayurvedic Cooking for Self Healing, Secrets of the Pulse: The Ancient Art of Ayurvedic Pulse Diagnosis, and Marma Points of Ayurveda: The Energy Pathways for Healing Body, Mind, and Consciousness with a Comparison to Traditional Chinese Medicine [not evidence or reality].

Diagnosis: Pure woo, of course, but Lad (with some help from Chopra) has had quite a bit of success, despite the total lack of connection to reality characterizing his teachings, and must be considered highly dangerous.
Posted by G.D. at 12:18 PM