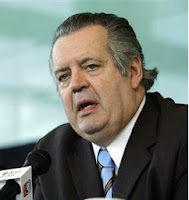 Richard D. Land is the president, or recently retired president, of the Southern Evangelical Seminary in Charlotte, radio host of Richard Land Live! (which closed down in 2012 after several cases of plagiarism were disclosed), and executive editor of The Christian Post. He was formerly the president of The Ethics & Religious Liberty Commission of the Southern Baptist Convention, a post he held for some 25 years (and was succeeded by the apparently clinically delusional Russell Moore). And as usual, you can be pretty damn sure that an organization that contains both “ethics” and “liberty” in their name is an organization devoted to the exact opposite – their “Richard Land Distinguished Service Award,” was in 2013 awarded to none other than Tony Perkins. A rather telling example is Land’s response to the Kitzmiller v. Dover ruling, which he described as a crime against humanity and “a poster child for a half-century secularist reign of terror.” (He also said that since one side argued that ID was science and the other side argued that it wasn’t, the judge had no right to decide which one was right, which suggests a rather poor understanding of what judges are supposed to do.) Needless to say, Land is an unrepentant fundamentalist, advocating a fundamentalist biblical position on issues from religious liberty to the economy.

In 2001 president Bush appointed Land to the US Commission on International Religious Freedom, a position he had when he wrote the infamous Land letter, an open letter to President Bush by leaders of the religious right in 2002 outlining a “just war” argument in support of the subsequent military invasion of Iraq. Bush was sufficiently impressed to reappoint him twice (he served until 2011). (Indeed, Land believes that God intervened in the 2004 election to make sure Bush was elected.)

Let’s start with the scandals. In the March 31, 2012 edition of Richard Land Live!, Land accused the Obama administration and civil rights leaders of using the Trayvon Martin case to deliberately stir up racial tension and “gin up the black vote for an African-American president who is in deep, deep, deep trouble for re-election.” That earned him some criticism. (In fact, Land had lifted most of his commentary from a column by the frothingly lunatic Moonie Times contributor Jeffrey Kuhner.) Land defended himself by trying to argue that Obama started it by “turning he Trayvon Martin shooting into a national issue,” but even his Southern Baptist friends didn’t quite buy that. After the subsequent discovery of extensive plagiarism Land lost his radio show and resigned as President of The Ethics & Religious Liberty Commission.

Land on social issues
Land is a signatory to the Manhattan Declaration and well-known for his bigoted lapses into hyperbole and conspiracy theories – a typical example being, perhaps, his claim that “gay activists” seek to destroy marriage in order to achieve full-blown “sexual paganization of society”. To this end homosexuals are “recruiting” children, which is a form a child abuse, all the while claiming that homosexuality is “incomprehensible” and to be blamed on the devil. (In fairness, one can see why homosexuality is incomprehensible to Land, the source of incomprehension being, of course, the density of his bigotry.) He also – as so many others dimly realizing that their other arguments are rather poor – feebly claimed that repealing DADT would “bring God’s judgment on our nation,” and tried to compare his battle against gay marriage with MLK’s fight for racial justice (which should probably be understood in light of his Trayvon Martin comments). It is still telling that Land (after comparing Obama and Democrats to Nazis) has repeatedly called for civility and appealed to decency in the debate over gay marriage. Indeed, in 2012 Land came up with what he deemed “a modest proposal” that he hoped everyone could agree on: Ban gay marriage.

But it isn’t just gay marriage; Land has actually recently argued that single mothers have a moral obligation to put their kids up for adoption. And here is his contribution to the War on Christmas – those who don’t celebrate it the way he likes (e.g. recognizing Santa as just another Golden Calf) are apparently damning themselves to hell.

Land vs. Science and Reason
Of course, Land is also a hardcore creationist (as evinced by his Kitzmiller v. Dover comment above), and his arguments for creationism consist of the standard creationist PRATTs (no, he displays absolutely no awareness of the science or how science works):

- A “significant majority of Americans don’t believe [in evolution],” which is a false but rather telling argument.
- “I believe in evolution within species,” but not in “Darwinian theory of origins.”
- “It takes far more faith to believe nothing became something than to believe in a Creator,” which, even if true, would have nothing to do with evolution
-  “Irreducible complexity”.
- Darwin didn’t know about single-celled organisms since he did not have microscopes (false; microscopes had achieved the Rayleigh limit in the 19th century, and Darwin wrote papers about microorganisms).

His anti-science stance is part of the background for his firm opposition to public schools in general (public school are “a lousy place for Christian kids”).

There is a good Richard Land resource here.

Diagnosis: Notable for having been one of the movers and shakers in the anti-enlightenment movement whose firm stance against reason, sanity and decency, Land is hopefully somewhat neutralized by now. Still.
Posted by G.D. at 1:28 PM