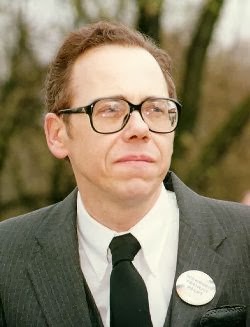 The inclusion criterion for gaining an entry in this Encyclopedia is being a loon – evil or fraud, for instance, won’t do, even if such behavior may occasionally be hard to distinguish from lunacy (especially since these qualities are not mutually exclusive). But I strongly suspect we’ll have to give Matthew Lesko a pass if we stick to those criteria.

Frederick "Fred" A. Leuchter, Jr. is a no-brainer, however. Leuchter is an alleged expert in execution technology (though he has no training in the various sciences), manufacturer of electric chairs, and author of forensic Holocaust denial material. Indeed, Leuchter is responsible for most of the forensic quasi-research commonly cited as evidence by Holocaust denialists. In 1988 Leuchter was hired by Holocaust denial celebrity (but Canadian) Ernst Zündel to investigate whether the gas chambers in Nazi concentration camps could have been used for mass extermination, and concluded – in the infamous The Leuchter Report: An Engineering Report on the Alleged Execution Chambers at Auschwitz, Birkenau, and Majdanek Poland – that they could not have been. Of course, Leuchter has – to emphasize yet again – no relevant scientific background for making the claim, but that, of course, is generally not a barrier when you have a good conspiracy theory. The report had a non-negligible impact on his career, and in 1999 he became the subject of the Errol Morris documentary “Mr. Death: The Rise and Fall of Fred A. Leuchter, Jr.”. A succinct criticism of his report can be found here (also here).

In other words, following his report Leuchter became something of a bigshot in the Holocaust denial community, and the fact that his conclusions have been rather thoroughly refuted doesn’t prevent him from repeating them or the conspiracy theories that inevitably comes with Holocaust denial. Leuchter has, predictably, blamed criticism of his work on an “international cabal... those who have unjustly attacked me and violated my rights... the Klarsfelds, Shapiros, and Kahns of the world.”

Even his work related to capital punishment is rather controversial. He has been arraigned for fraudulently practicing engineering, and criticized for running a “death row shakedown scheme”: if a state didn't purchase Leuchter's services (i.e. if they chose different techniques, or different contractors for the instruments), he would testify at the last minute for the condemned man that the state’s death chamber might malfunction, and his testimony on execution related matters have been deemed “unreliable” by courts. Again, of course, his loss of credibility is, according to Leuchter, the result of a conspiracy.

Diagnosis: Maybe there is hope, but probably not for Leuchter, who is irrevocably mired in self-aggrandizing delusions and lack of analytic skills. His influence has been substantial, and continues to be frightening.