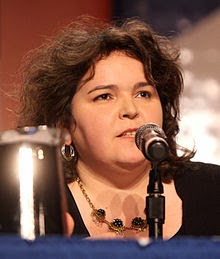 Kathryn Jean Lopez is a nationally syndicated (United Feature Syndicate) batshit crazy columnist and blogger, former editor of National Review Online, and known colloquially as K-Lo presumably because of her obvious intellectual inferiority to the more famous J-Lo. K-Lo is deeply anti-feminist, anti-affirmative action, anti-abortion, and anti-contraception, but very much a fan of Sarah Palin and Dick Cheney (as well as George W. Bush – K-Lo’s suggestion for a post-presidential career for Bush is one we should hope he never takes seriously) and unhinged, irrational patriotism. She is known for her extraordinarily bad grammar and writing skills, which is worth pointing out since she has also claimed that correct pronounciation is an example of liberal elitism (after all, just listen to the much-admired Sarah Palin pronounce “nuclear”): “[N]o one in flyover country says Pock-i-stahn. It’s annoying.” Clearly Obama is unfit to govern.

Of course, given who she is, Lopez is not particularly fond of gay marriage, defending New York Archbishop Timothy Dolan’s attempt to liken marriage equality to North Korea: “Do not be so quick to dismiss the North Korea comparison, Mike [Potemra]. We are witnessing tyranny today that is fostered by a false sense of freedom, a tyranny that faux tolerance ferments.” Even her readers took her to task over the analogy, to which her defense was: “To dismiss the N. Korea analogy as beyond the pale is to deny the rational of the founding fathers” and “[t]oo much Team America and not enough Aristotle in these dismissals of the N. Korea analogy.” Duh. Of course, K-Lo has her own understanding of the Constitution: “We’re a nation not just where you are free to believe or not to believe; we’re a nation founded for Him – so we could praise Him, so we could do His will.” But that is not an entirely accurate summary.

She is also a polling conspiracy theorist, of the “I am not a poll conspiracy theorist. At least I don’t want to be. But …”-kind, having defended such conspiracies long before it became popular just prior the 2012 election. Back in 2008, when, according to K-Lo, God wanted you to vote McCain, there must clearly have been a conspiracy; how else could he lose so badly?

Diagnosis: Yet another one. And as dimwitted as the rest.
Posted by G.D. at 11:18 AM