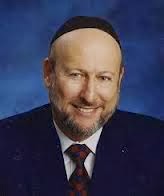 Daniel Lapin is a rabbi, author, public speaker, head of the American Alliance of Jews and Christians, founder of the Pacific Jewish Center in Venice, California, former head of Toward Tradition, the Commonwealth Loan Company and the Cascadia Business Institute, former partner of Jack Abramoff, television host, and batshit rabidly insane. His nemesis in life is, apparently, godlessness, which is apparently to a large extent caused by the influence of Baal. "The only hope for our economy, for our military security, for our cultural viability, for a civil society - the only hope for all these things - is a revival of fervent, committed, evangelical Christianity," says Lapin. Fundamentalism's track record suggests it's the perfect solution to everything.

The godless are also liberal: Concerning the Occupy Wall Street movement (Lapin propagates his own version of the Prosperity Gospel), Lapin said that those protesting Wall Street – not the Wall Street bankers who triggered the financial crisis – are “barbarians” who want to “obliterate” civilization, bemoaning the fact (or delusion) that “the spiritual heirs of Bach and Beethoven” at Harvard University “are now banging bongo drums” and that “degeneracy” dominates the Occupy Wall Street demonstrations. That kind of guy. As for the prosperity gospel, Lapin is the author of Thou Shall Prosper: Ten Commandments for Making Money, which he has promoted (among other things) on the program run by his fellow Abramoff associate Benny Hinn, and Boost Your Income! Three Spiritual Steps to Success. His methodology is more or less equivalent to that promoted in The Secret.

Another atheist conspiracy, according to Lapin, is environmentalism: the whole purpose of the environmental movement is apparently to do away with Genesis 1-3, or so he told a rather sympathetic James Dobson. The atheist methods are really rather subservise; as Lapin told David Barton (they’re really charmingly stupid and insane together, with Barton’s historical revisionism and Lapin claiming that staying single leads to tyranny); major sources of evil godlessness, for instance, is caring about our pets – there is, apparently, just a few steps from caring about pet animals to anti-human ideologies such as Nazism – and feminism. With Lapin being the idiot he is, lots of things lead to Nazism, in particular the “twisted and diseased pathology” of liberalism.

In the end, though, the real culprit to blame for the fall of Western civilization is the pill. According to Lapin, women who use the birth-control pill ruined masculinity and “created the possibility of perpetual male adolescence,” which went on to wreck traditional American values; so instead of attacking epiphenomena such as gay rights or pornography, Lapin has put a concentrated effort into fighting contraception. He is also a central battle commander in the imaginary war on Christmas.

Here is a short snippet on Lapin’s Hebrew numerology.

Diagnosis: A truly and utterly repugnant and malicious person – and, of course, he is the pal of many central political figures (from James Dobson and Karl Rove to Tom DeLay). Extremely dangerous.