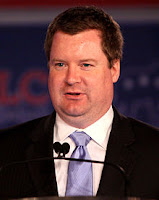 Erick Erickson is the managing editor of the site Red State and is apparently (at least in 2010) one of the conservatives “to watch”. He may actually have a little bit of political influence, partially – perhaps – through his “Red State Strike Force”. Apparently his efforts made him a CNN contributor, for some reason.

Political Analysis
In any case, the depths of his political erudition are quickly revealed when taking a look at the stuff that falls out of Erickson’s mouth and pen (his antics are briefly but well covered here). Erickson claimed to be shocked, for instance, that liberals claimed that Holocaust museum shooter James von Brunn is a conservative – first of all, that’s poisoning the well (Erickson would of course never mention the political affiliation of a terrorist in a time of tragedy), and second everyone knows that it is liberals who encourage people to kill. That, of course, meant that he had to weigh in on the Gifford shooting as well. In fact, in the Gifford case Erickson said that the thing we should all really be talking about – instead of the political dimension – is the fact that the Jewish Giffords have the wrong religion) (do have a look at his comments – they are absolutely, breathtakingly insane, even by the standards set by other entries in this Encyclopedia). Yes, seriously – that was Erickson’s frame. According to Erickson “we are seeing more and more a pattern of violence from those who reject Christ and we are seeing the most extreme rhetoric from those who reject the only real truth while embracing every other historic fad and nonsense as variations of truth.” He seems to be a little unclear about who was the victim here, but there is at least a long tradition for failing to identify the actual victim when the victim is Jewish. And the shooter was not a conservative, mind – he was evidently possessed by demons (Erickson tried the same double standard in the Breivik case). In a related vein, Erickson claimed that Obama perverted the word of God (presumably making him a heretic) during the National Prayer Breakfeast, apparently because Obama didn’t focus on those Bible verses that call for violence. Erickson’s breathtaking lack of ability to draw important distinctions is well documented here.

He has also suggested that Democrats (“The Party of the Klan”) are racists because some of them didn’t vote for the black candidate in the 2008 primaries (take a second to ponder that claim) – and also that Obama’s Nobel prize must have been the result of affirmative action. He has also called Obama a racist, for the expected and utterly moronic reasons.

Erickson on gay rights
Wonder what Erickson’s view on homosexuality is? At least he has argued (or “claimed” – “argue” implies techniques outside of Erickson’s repertoire) that Kevin Jennings wants to rape little boys, just like all of Zeh gayz, and that this is part and parcel of the gay agenda.

As most wingnut loons Erickson claims that he is being going to be repressed for his views on gay marriage because, well, because anyone (but Erickson) will obviously take measures to violate all and any Constitutional rights in their push to silence disagreement, and Erickson is already criticized for his views – how can this possibly end?

Here is Erickson chiming in on gender equality.

Erickson on Palin
Erickson was a vocal fan of Palin from the very start, but realized that “she cannot win given the ridiculous smears and hate thrown her way by Democrats.” The fact that Palin is a complete moron had nothing to do with it – it’s all the smears. At least he knows the explanation for why many women don’t like Sarah Palin? “Sarah Palin is disdained because she had a Down Syndrome child and all the forty something first time moms dropping their kids off (assuming it’s not the nanny doing it) at Birch Wathen Lenox, Trinity, and Dwight before going to work at their six-figure jobs know that smart women abort Down Syndrome babies – there’s a great clinic in SoHo where you can shop fashionably before the ‘procedure’.” Right. That must be it; his precise description of the Democratic party base itself proves that Erickson has found the mechanism behind the democrat’s disdain for Palin – it has nothing to do with disagreement over politics. He has also said that progressives have been plotting Palin’s murder.

Miscellaneous
Among other Erickson trivia his threat to pull a shotgun at Census workers may be worth mentioning (His, uh, history of rather fierce rhetoric was a topic in this rather excellent interview with Howard Kurtz). The pinnacle of Erickson-related idiocy, however, may well be his claim that Conservatives who deny Rush Limbaugh are just like Peter when he denied Christ.

There is a pretty good take on Erickson here, and a fine resource here.

Diagnosis: Among Erickson’s main problems is that he doesn’t quite understand the notion of supporting claims with reasons. Since that trick has eluded him we have the predictable result. It is rather worrisome that some people actually listen to him.
Posted by G.D. at 1:41 PM