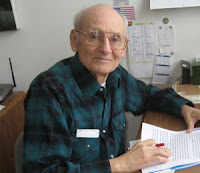 Wayne Frair is the former president of the Creation Research Society, co-author (with Percival Davis) of the book “A Case for Creation”, contributor to the book “In Six Days” (edited by one John Ashton; the book was written as a response to Stephen Jay Gould’s assertion that no legitimate scientists believed in creationism, and the inclusion of people like Wayne Frair, who is definitely no scientist (he has done no science) kinda underlines Gould’s point), and author of several rants about baraminology, a field he is largely responsible for bringing into existence.

Frair was a witness for the Defendant in MacLean vs .Arkansas Board of Education, where he admitted that he accepts the Bible as literally and historically true, something that didn’t exactly help the Defendant’s case.

Diagnosis: Daft dullard with little time for aligning his opinions with reality. Not a particularly familiar name, perhaps, but nevertheless an important cogwheel in the denialist machinery.
Posted by G.D. at 12:55 PM