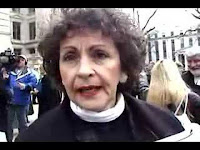 Sadie Fields is the head of the Georgia chapter of the Christian Coalition (actually, she seems to have retired), and she lives and breaths delusion. Her influence is probably rather limited, but she is determined to spread exactly the kind of Taliban-envying fundie nonsense you’d expect of someone in her position. Her uncompromising state of denial has led to some attention on at least two occasions.

In 2003, Cobb Country School Board required a sticker be placed in all biology texts saying: “This textbook contains material on evolution. Evolution is a theory, not a fact, regarding the origin of living things. This material should be approached with an open mind, studied carefully and critically considered,” and it was claimed that the school board was encouragining “critical thinking” (yet deliberately misleading students regarding what a scientific theory is). The sticker was rather obviously judged unconstitutional, but enter Sadie Fields: “It’s another example of how the bench is dictating to people what symbols they can display, if they can pray or not pray or if they can teach a particular subject.” No, Fields. You are not being persecuted, and your religious freedom is not compromised by the fact that schools are required not to deliberately mislead children for religious reasons.

And in 2006 a Federal judge in Atlanta struck down Georgia’s law that made the sale of bibles (but not other religious books) exempt from state taxes. Enter Sadie Fields: “It does not reflect the will of the people in Georgia. I think it’s an outrage,” adding that she would oppose expanding the sales tax exemption to other spiritual philosophies: “I don't see any comparison between Scripture and some metaphysical nonsense.” In other words, she is being persecuted for her religious beliefs unless her religious views are not explicitly favored by the government.

Diagnosis: At least she is an illuminating example of a certain mindset. That’s probably the best that can be said of her
Posted by G.D. at 9:34 AM