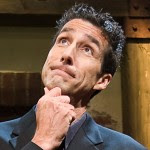 I’m willing to give Manis Friedman a pass; he was reported as saying this in an interview with Moment Magazine, but claims to have been misquoted. No such excuses for Todd Friel, who is the host of daily radio show Way of the Master Radio (later “Wretched Radio”), the show where Ray Comfort and Kirk Cameron frequently appeared as co-hosts between 2006 and 2008 (there is an excellent Way of the Master resource here). Friel shares their views. For instance, Friel is a young earth creationist who thinks evolution = random chance (no, trying to explain the obvious problem to him is futile; forget it) and insulting to our intelligence (how would he know?). He has said of evolution that “[e]ither the theory is wrong, or I’m just incredibly stupid,” which is at least somewhat insightful.

Friel likes to argue that those who do not believe in Jesus must therefore hate Jesus, which most others would think is not only a false dilemma but sort of a contradiction. He doesn’t like VeggieTales either.

Some notability were achieved for his belief that the people who died on September 11 deserved death – otherwise God would have saved them – and that having an abortion has never, ever saved a woman’s life (since God, in his grace, would not allow a pregnancy to threaten a woman’s life – even Todd Akin didn’t try that one). “Wait, what about the facts?” you may ask, but Friel is rather adamant not to let reality infer with his powers of intuition.

With regard to Islam, Friel has claimed that Muslims are the largest human traffickers today (and it was, by the way, evangelical Christians who started the abolitionist movement because the Bible strictly forbids slavery) and have primarily been helping the Nazi party.

There is a nice summary of Friel’s famous debate with Christopher Hitchens here (and a discussion here); his debate with Eddie Tabash here, and his debate with Dan Barker (as well as a review of Friel’s DVD “The Case fo Atheism – there isn’t one”) here. The general “debate” tactics employed by Friel and his fine fellows (in addition to Comfort and Cameron these would be Tony “Law Man” Miano, Emeal “EZ” Zwayne, and Trisha Ramos) are discussed here.

Diagnosis: It is hard to imagine anything denser than Todd Friel – when you think you’ve seen the ultimate dumbheadedness, Friel always manages to top it. It’s actually rather fascinating, but not in a good way.
Posted by G.D. at 12:47 PM