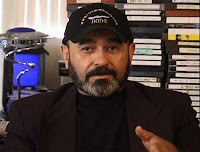 Jose Escamilla is a ufologist, conspiracy theorist and crank, most famous for his discovery of the strange “rods” (related, apparently, to orbs) over New Mexico; they are insects, and have been demonstrated to be so (here’s a site on Escamilla’s insect pictures in particular), but that’s not exactly Escamilla’s interpretation. He calls himself a producer-director and has edited footage of these rods for the last 20 years. Cynics may wish to focus on the “edited” part, but there is some evidence that Escamilla ran crazy with a honest mistake.

His first film, “UFO, The Greatest Story Ever Denied” begins by talking about the rods, before it launches into Roswell and the Moon landing hoax, complete with advice for viewers who wish to capture “invisible” UFOs on film (without actually explaining how to do exactly that). The film is of course full of grainy and blurred “UFO” pictures, dramatic music, and interviews with a wide range of village originals.

As for the moon landing thing, Escamilla doesn’t in fact deny that we have visited the moon, but subscribes rather to the “Moon Alien Belief”, namely that the moon is filled with alien, intelligent life and that NASA, instead of making contact, has launched nuclear missiles into space to try to take them out. It is all described in his movie “Moon Rising”, which is based on rather glaring factual errors and is, indeed, one of the most profoundly silly “documentaries” ever made.

In any case, it seems that even the regular crowd of gullibles are currently starting to see that Escamilla’s ideas are pretty much worthless, which has left him madly ranting for donations and blaming anyone and everyone for conspiring against him. The whole thing is in fact a little sad.

Diagnosis: Arch-crackpot who started out with a splash by making a real fool of himself, then continued to make it even worse when he tried to control it. He still seems to have some followers, though.
Posted by G.D. at 3:57 PM