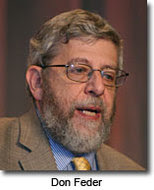 Don Feder is a media consultant, writer (A Jewish Conservative Looks at Pagan America and Who's Afraid of the Religious Right?) and World Congress of Families Communications Director, and that title should give you some indication of where this entry is going. “Faith, family, freedom and national security” is the slogan of his communications firm Don Feder Associates, and he makes regular appearances on TV and radio shows hosted by the darkest forces of the Religious Right. “Memo to conservative defeatists: Surrender on gay marriage is surrender on marriage – which is surrender on the family and, ultimately, surrender on civilization,” says Feder, but abstains from trying to explain the causal mechanism. At least he spends some efforts to remind his fellow wingnuts lest they forget. Helpfully enough he also points out that “the left deserves to be hated; it merits our derision and scorn … Two possibilities arise. Liberals are unbelievably stupid – so dumb that they need help tying their shoes and not walking into walls – or they're malicious malcontents consumed by envy and animated by a lust for power – in a word, evil.” How else can you explain marriage equality or healthcare reform? Feder explains: “Democrats are to traditional religion what Islam is to tolerance,” and if that doesn’t convince you: “Gay rights is about indoctrinating your children in behavior that would make a proctologist gag. It’s about criminalizing dissent via speech codes and hate crimes laws. It’s a frontal assault on First Amendment free speech and religious freedom. This is freedom only in the sense that killing unborn children is choice.” Indeed, promoting gay rights is setting out on “the sexual-equality death march, which ends with the demise of Judeo-Christian morality.” And that should make everything clear, shouldn’t it?

Indeed, according to Feder, Americans are facing a “cavalcade of degeneracy” and “toxic trash” in the form of gays and immigrants (Latinos are like the “pagan armies” of the Bible, “yearning to breathe free stuff,” according to Feder), and the cavalcade is made even more insidious by the recent restrictions on gun laws (which were put into effect in Feder’s mind) that are used to “disarm the innocent” and render them incapable of doing anything about this plunge into moral depravity. Meanwhile, Obama is intentionally ignoring threats from Islamic extremists while trying to increase the country’s Muslim population as part of the secret agenda of the leftist-islamist alliance. And as a true conspiracy theorist, Feder has bought fully into the idea that Democrats will “soon” put conservatives in concentration camps. Evidence? Well, you know … “try to see the big picture,” was the only attempt at trying to back it up we could find.

Apparently relatedly, Feder thinks that Grover Norquist is in a one-man conspiracy to destroy conservatism. Feder is also behind the campaign “Boycott The New York Times,” the purpose of which is to boycott the New York Times because they are moral relativists and therefore terrorists (apparently he still reads it).

Diagnosis: At least his rants are helpful in one respect: if Don Feder is on your side you know you’re on the wrong one. Apart from that he’s just a crazy old producer of gibberish with a certain amount of unfortunate impact.