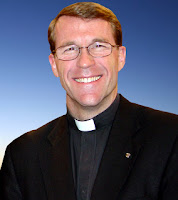 Thomas J. Euteneuer is a Catholic priest in Palm Beach, a pro-life activist, and president of the organization Human Life International (HLI) from 2000 to 2010. If you ever wondered what kind of organization HLI might be, you might have a look at this worry from one of its spokespersons, Stephen Phelan.

From the start of his career Euteneuer used his position to engage in prayer vigils, pilgrimages, pickets at abortion clinics, sidewalk counseling and the establishment of a crisis pregnancy center across the street from an abortion clinic in 1999 (the subject of an HBO documentary in 2010). He has also warned that homosexuality means the end of Christian civilization as we know it, but fails to clarify what he means or thinks the causal mechanism is supposed to work.

He is, however, most famous for his job as an exorcist, and has written a book on the subject, Exorcism and the Church Militant. In his book he warns us, among other things, that Harry Potter and the Twilight vampire books of Stephanie Meyer “glamorize the power of evil and this has led to many, many cases of possession among young people.” At least he also criticizes reiki, though for all the wrong reasons (the response from reiki master Sue Routner was, interestingly, that “[i]t is very sad that the bishops feel the need to denounce Reiki and feel justified to do so publicly. I also find it very odd that they argue on the basis of scientific proof, as they have up until now not provided any such proof that God exists,” which is a good response but one that puts the reiki master herself in a rather awkward dialectical position).

Euteneuer’s spate as an exorcist did lead to him being forced to resign as president of the HLI, however, after – predictably – he admitted to having “violat[ed] the boundaries of chastity with an adult female who was under my spiritual care.” The emphasis on “adult” is interesting (and discussed here). He was, however, quick to point out that “the "vast majority of my decisions and conduct, both personally and in this ministry, were morally sound and consistent with all standards of pastoral care of persons,” which sounds, when you think about it, a little weird as well.

Euteneuer also received some attention for trying to blast Sean Hannity for Hannity’s stand on contraception as being morally acceptable. He fails, and frankly: if you fail at identifying Hannity’s stupidity you are a pretty hopeless case.

Diagnosis: Malevolently insane fundie maniac and pervert whose self-perceived mission in life is to think about, comment on, and intervene in other people’s sex lives. The results have thus far been predictable.
Posted by G.D. at 2:16 PM