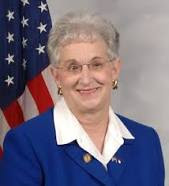 Virginia Foxx is, like Randy Forbes two entries ago, a Republican member of the American House of Representatives, representing North Carolina. She is absolutely abysmally crazy, and able to give Michele Bachmann quite a run for her money. Now, Foxx actually did experience something of a scandal early in her career when she took a small donation from a gay rights group. But she emerged all the wiser, and that’s sure not gonna happen again.

Foxx’s stance on gay rights is easily illustrated by her comments on the Matthew Shepard case. As some will (and should) remember, Shepard was tortured and crucified because he was gay. Not according to Foxx; in fact, she claimed the murder was a “hoax”, though she offered few explanations of how the circumstances could constitute a hoax apart from flat denial.

She has also claimed that universal health care is more threatening than terrorists, which for most people would be just another instance of ridiculous hyperbole but which from Foxx’s mouth sounds as if she genuinely believes it (as is the case with her support for the “Christmas Resolution”). In fact, Foxx has blithely asserted that “there are no Americans who don’t have healthcare”. A states of denial doesn’t come more denialist than this.

She has also claimed that the Republican Party passed the Civil Rights Act with no help from the Democratic Party, despite the fact that Lyndon Johnson more or less forced it through Congress against howls of protest from Republicans, but historical revisionism is nothing new from wingnuts of Foxx’s ilk – in fact, Foxx’ revisionism sometimes reaches almost otherworldly standards, such as when she claimed that “[a]ctually, the GOP has been the leader in starting good environmental programs in this country,” said in connection with her vigorous opposition to such programs.

Diagnosis: Blathering old fool, who is unable to recognize that wishful thinking is a fallacy, partially because she also fails to see that consistency is a virtue.
Posted by G.D. at 10:50 AM