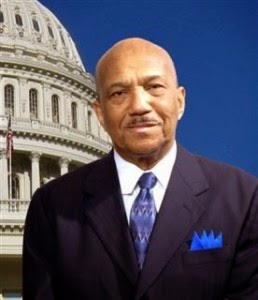 William Owens jr. is the founder and president of a tiny outfit that goes by the name of the Coalition of African-American Pastors (CAAP). He is also National Organization for Marriage’s (NOM) religious liaison, and as such just as unhingedly crazy as you’d imagine. Owens is a True Christian™. President Obama, on the other hand, is not a True Christian (but probably more of a Muslim thing), largely because Obama “is intent on ending capitalism with his communist policy of redistribution of wealth.” And that gives you an idea about where Williams Owens comes from, or at least where he has been standing in more recent years – he was once a civil rights leader in Nashville; not much left of that at present, though Owens doesn’t seem to be aware of his fall).

CAAP, a small, strange group, which exists solely for the purpose of attacking African-American leaders and organizations from the right, in particular on the topic of the relationship between democrats and gays. Indeed, the group – or project – is associated with NOM’s plan (according to internal planning documents) to “drive a wedge between gays and blacks.” Owens, on his side, thinks a man having sex with another man is like a man having sex with a dog and that homosexuality is a contagious disease caused by and spread through molestation, which of course makes him perfect for NOM’s morality agenda, and he does not hesitate to draw a connection to the Democratic party. Indeed, not only is Obama not a Christian according to Owens (I mean, he supports gay marriage – that should silence all doubts) but the Democratic Party is also a “demonic party” that must be stopped (some of his statements to that effect are discussed here). Apparently Obama wants a “dictatorial-style rule” (and “has rejected God”), which is, of course, synonymous for disagreeing with Owens and which makes Obama just like a white supremacist.

When marriage equality was on the Maryland ballot in the 2012 election Owens, never one to shy away from hyperbole, warned voters that if we “change God’s law” by legalizing same-sex marriage and adoption then “the whole gamut of the family is going to be destroyed and all areas of the social life will be destroyed from what has been for thousands of years.” Indeed, gay marriage will “deteriorate the black family more than anything else” (no further explanation given, but his wife, Deborah Owens, made a similar assertion in a Washington Times op-ed where she warned that the “homosexual agenda” will “erode the very foundation of our society”). Fortunately, Owens said, black voters are turning against Obama because of this issue.

To no one’s surprise Owens was deeply hurt by the DOMA decision; according to Owens the Supreme Court “neglected our most precious children who need a mother and a father united in marriage for healthy development,” and repeated his warnings about the erosion of society. He also called for anti-gay activists to launch a new Civil Rights Movement to fight and seek to repeal the civil rights of gay people (Owens wouldn’t have put it quite like that; indeed, Owens would say “think of the children”: “The adults are confused and they’re confusing the children,” Owens lamented, “how can two men rear a child? How can a man be a mother? Tell me that.” But that’s not quite how civil rights work.) In 2014 he seems to have been primarily devoted to pushing for the impeachment of Attorney General Eric Holder for “trampling the rule of law” by not defending DOMA, and therefore for trying “to coerce states to fall in line with the same-sex ‘marriage’ agenda;” indeed, according to Owens, Holder “shredded” the Constitution “in order to impose a radical homosexual agenda,” one that betrays “the black community and the values that we hold dear.” What? You miss reason and argument? Oh, but it was never about that for William Owens.

Diagnosis: It’s getting a bit tiresome, isn’t it? At least his impact appears to be limited.
Posted by G.D. at 11:30 AM