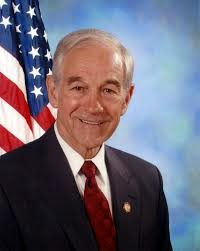 A lot of people we admire harbor quite a bit of respect for Ron Paul. And indeed, the paleolibertarian Paul has occasionally said intelligent things, and has rather frequently come across as a voice of reason in Congress. Fine. For the purposes of this Encyclopedia, Paul’ political commitments are not the issue, and even granting for the sake of argument that he has been an overall positive force in American politics, we would have a duty to point out his lunatic side as well.

The problem in the case of Ron Paul is largely a matter of his heavy involvement with the Dominionist and Christian Reconstructionist movements. For instance, Paul is a close associate of theocratic madman Gary North (a Paul researcher back in the 70s), who is also the recently appointed North Director of Curriculum Development for Paul’s new homeschooling program (also here). I leave readers to ponder the level of crazy this represents. And although Paul’s policies are far from dominionist at the federal level, his proposed legislations would result in the strengthening of a theocratic agenda by preventing the federal government from stopping establishment of theocratic legislation at the local level. His We the People Act would strip the Federal courts of jurisdiction in cases involving abortion, same-sex marriage, privacy related to sexual behavior, and Establishment Clause issues, leaving them to the states, which is exactly what the Religious Right wants to do. And the thing is: Paul has been rather explicit that theocracies at the local level are part of his deliberate agenda, and has also backed up the idea for instance by lamenting that prayer has been prohibited in schools, a common dishonest religious right trope, and by backing pastor Phillip Kayser, who advocates the death penalty for gays. It seems, in fact, to be not entirely unfair to say that Paul is a dominionist more than he is a libertarian, but that he sees limited government as the primary practical means to theocracy – he wants the church to be strong and the state to be weak: “The Founding Fathers envisioned a robustly Christian ... America, with churches serving as vital institutions that would eclipse the state in importance.”

Since he is a religious extremist, Paul does predictably not have much of an aptitude for science. He is, for instance, a creationist, dismissing evolution as “just a theory” that he does not accept. He is also a climate change denier.

More notably, Paul – an MD – is a heavy promoter of all sorts of medical woo, and has predictably defended the Health Freedom Protection Act, which basically says that quacks should be allowed to lie to their customers without having to fear being held responsible (there is a fine discussion of Paul the quack enabler here). He is also member of the batshit crazy wingnut Association of American Physicians and Surgeons. He is also fond of crazy conspiracy theories, for instance claiming that there is a plot to eliminate American sovereignty and form a single union with Canada and Mexico (yup, the NAFTA superhighway conspiracy); apparently George Bush and Rick Perry are both part of that conspiracy. That theory may have replaced his previous theory that the United Nations is going to take over the Untied States, take away their guns and do away with the Constitution and American currency (which he claimed in this John Birch society-produced video), but who knows.

Diagnosis: At heart a doddering, old, deranged theocrat. There is no way around that conclusion.
Posted by G.D. at 10:55 AM