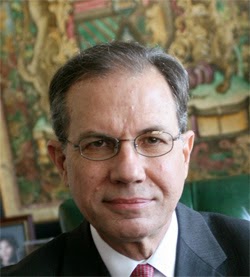 Marc Nuttle is a Republican adviser and economist and Chairman of The Oak Initiative, a far-right organization dedicated to promoting the Seven Mountains ideology, and whose president is none other than Rick Joyner. The group claims in its mission statement that “The Oak Institute is being developed to raise up effective leaders for all of the dominant areas of influence in the culture, including: government, business, education, arts and entertainment, family services, media, and the church,” otherwise known as the Seven Mountains of society that Dominionists think should be controlled by fundamentalist Christians.

Nuttle is in fact a pretty central figure in the religious right wing of the Republican party and been legal counsel and political counsel for numerous United States House of Representative campaigns (from Ronald Reagan to Pat Robertson to James Inhofe), and has popped up in numerous positions of power around the country (Here, for instance, is Oklahoma governor Mary Fallin appointing him to serve on the board of the Oklahoma Health Care Authority to ensure that everything is being done to prevent abortions from taking place in the state). In the 2012 elections he advised evangelicals, who had concerns about Romney’s suitability given his religion (not policy issues, of course), that they should nevertheless vote Romney since Mormons believe the US Constitution is Biblical Truth. That’s what goes for compelling reasoning about politics in those circles.

Diagnosis: Not the most vociferous madman out there, but a solidly crazy piece of dingbattery nonetheless.
Posted by G.D. at 12:26 PM