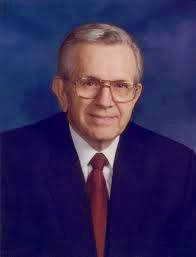 Boyd K. Packer is a Mormon leader and president of the Quorum of the Twelve Apostles of The Church of Jesus Christ of Latter-day Saints. He is, needless to say, considered something of an authority within the Mormon church – indeed, he is currently the second most senior apostle among its ranks. He is also, as such, among the big architects behind the Church’s official positions on various matters.

As a religious fanatic, Packer is predictably obsessed with sex – that is, other people’s sex lives – and his views on homosexuality, though exactly what you’d expect, are abominable.

A more personal style is revealed in his claims about history (on which he has no expertise), having advocated that LDS historians should refrain from discussing history that does not promote faith – i.e., censor out whatever doesn’t fit with Packer’s predetermined ideas about what contributes to his particular version of the Mormon faith. In a 1981 speech to educators in the LDS Church Educational System, he cautioned that “[t]here is a temptation for the writer or teacher of Church history to want to tell everything, whether it is worthy or faith promoting or not […] some things are to be taught selectively and some things are to be given only to those who are worthy.” Thus, with regard to all historians who are members of the LDS Church, he stated that “[o]ne who chooses to follow the tenets of his profession, regardless of how they may injure the Church or destroy the faith of those not ready for ‘advanced history,’ is himself in spiritual jeopardy. If that one is a member of the Church, he has broken his covenants and will be held accountable.” Yes, that’s how fundies do “science” – in the service of dogma. Intellectual honesty isn’t even on the radar. Of course, his statements drew some criticism – LDS member and historian Michael Quinn pointed out the obvious problems. It is not as obvious that LDS member C. Robert Mesle’s criticism – that Packer created what Mesle views as a false dichotomy “between the integrity of faith and the integrity of inquiry” – is much less loony when you think about what he’s actually trying to say. Packer’s views on art aren’t much different from his views on history, by the way.

Diagnosis: Probably in his nineties by now, but has – rather obviously – lost none of his reasoning powers, and retains a position of quite a bit of authority and power. A dangerous, evil old crank.
Posted by G.D. at 11:54 AM