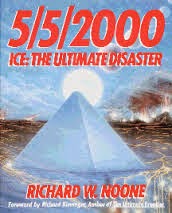 Richard W. Noone is a batshit crazy pseudoscientist, and one of the most famous proponents of Charles Hapgood’s crust displacement theory, the idea that formed the basis for the real-life documentary movie 2012. The general idea is, justified through truly painful torture and dismembering of modern physics, mathematics and geology (primarily by the methods of ignorance and blatant denial), that the Earth’s crust sometimes shift suddenly in relation to the rotational axis, causing massive changes to the crust. And as with all true crankery, the hypothesis predicts an immanent cataclysmic event. In his book 5/5/2000, ICE: The Ultimate Disaster Noone predicted that this cataclysmic shift would happen in, well, May 2000 (also here). It didn’t, so later fans had to move the date to 2012, and well …. At least Noone got to be the inspiration for Steven Myers’ absolutely brilliantly unhinged Pharaoh’s Pump Foundation. In fact, Noone’s book became something of a cult classic, though it is hard to find updated or detailed information on its author.

Another defender of Hapgood’s idea, William Hutton (a pseudonym) of the website Hutton Commentaries, wrote Coming Earth Changes: Causes and Consequences of the Approaching Pole Shift in 1996, where he predicted the cataclysm would happen before the end of 2001. Since Hutton is a true crank, he wasn’t stopped by his failures, and co-authored Earth’s Catastrophic Past and Future: A Scientific Analysis of Information Channeled by Edgar Cayce in 2004 (with Jonathan Eagle), where he just claimed it would happen “soon”.

Diagnosis: Absurd crankery. It should be just a source of amusement, but a few too many people take this bullshit seriously.
Posted by G.D. at 12:48 PM