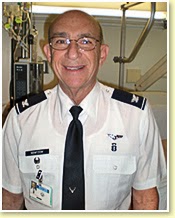 Richard Niemtzow is a radiation oncologist and Air Force physician (and former affiliate of The Mutual UFO Network and alien contactee) and an ardent promoter of woo in the military, most famously “auricular acupuncture,” or, as it’s sometimes called, “battlefield acupuncture,” (yep) which is, insidiously enough, offered for post-traumatic stress disorder. But Niemtzow (and his colleague Stephen Burns) goes further than acupuncture – he also promotes healing touch and reiki, “energy medicine” based on medieval vitalism. “Healing touch (also called therapeutic touch or Reiki) is an energy-based, non-invasive treatment that restores and balances the human energy field to help decrease pain and promote healing,” says Niemtzow and his allies, and have conducted unblinded pseudostudies to justify it (along with something called “chakra spread”, which includes instructions to “focus on the love that God has for this person while slowly spreading both hands outward as far as possible three times”; “pull access energy off the legs and feet by placing your hand over each leg and moving slowly downward”; and “visualize energy being pulled up from the earth through your spine and spreading throughout your body.”) If the above-mentioned nonsense “study” is not enough to convince you, Niemtzow has another one, which is really just a collection of anecdotes – in short, when faced with a need for more studies, Niemtzow and his ilk do less rigorous ones, which is the only way he can get the studies to show what he wants them to show. He has nevertheless apparently been somewhat successful at evangelizing for his diverse brand of quasi-religious bullshit.

You can see navy captain Elwood Hopkins defend woo in the military here, giving you an object lesson in how not to do critical thinking and assessment.

There’s a good article on the nefariousness of Niemtzow’s practices here.

Diagnosis: Madman and crackpot, and apparently one of the most influential such at present. Unintentionally evil, and wielding enough influence to be able to cause some actual harm to real people.
Posted by G.D. at 11:47 AM