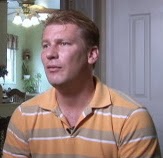 Phil Parker of the Phil Parker Lightning Process is British, and hence disqualified. One might have considered Tara Parker-Pope for drivel like this, but I’ll give her the benefit of doubt for the moment.

There is no possible excuse for David Paszkiewicz. Now, Paszkiewicz may not be a celebrity figure or big name, yet he is another of those poor religious fundamentalist martyrs who were tyrannized into not forcing his religious views on children in public schools. You see, Paszkiewicz was a history teacher who used to teach his students that the literal truth of the Bible was unquestionable and that dinosaurs were aboard Noah’s ark. If you do not accept Jesus, Paszkiewicz argued to his class, “you belong in hell,” singling out (by name) in particular a Muslim student, lamenting what he saw as her inevitable fate should she not convert. Of course, he also promoted biblical creationism, dismissing evolution and the Big Bang as non-scientific (no, he would have no idea, but “not lining up with my fundamentalist delusions” doesn’t sound as good as calling something “non-scientific”), arguing by contrast that the Bible is supported by what he called “confirmed biblical prophecies.” (Also here)

As expected, and as decency demands, he ended up in some trouble for the contents of his lectures. When a student confronted him, Paszkiewicz denied ever having made any of the remarks. The remarks had, however, been recorded, and when that was revealed, Paszkiewicz commented that the student “got the big fish … you got the big Christian guy who is a teacher…!” As a good religious fanatic he did not seem to have any moral concerns about his own lying.

He has later tried to defend his actions by trying to argue that “the words ‘separation of church and state’ cannot be found in our Constitution,” as well as making a string of falsehoods about history (his alleged area of expertise) that might have made David Barton blush (but probably wouldn’t).

Of course, Paszkiewicz has never managed to grasp why he got in trouble. It is, in fact, unclear to what extent he got in trouble at all, and many of the townspeople of Kearney, New Jersey, certainly didn’t get it. The Kearney school district, where Paszkiewicz worked, did something, however: they banned recordings of their teachers to prevent similar embarrassments in the future.

Diagnosis: The living, breathing meaning of the phrase “Liar for Jesus”. As spineless, dishonest and morally corrupt as they come; when combined with a solid dose of self-righetousness the resulting sight is not pretty.
Posted by G.D. at 9:24 AM