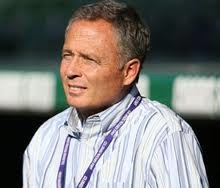 Dan O’Dowd is the general manager for the moderately successful Colorado Rockies baseball team, and a severe godbot. Now, it is not a particularly uncommon among this type, but O’Dowd believes God has a hand in the victories of his team (and, to emphasize, O’Dowd really seems to actually believe this – not just for show): “You look at some of the moves we made and didn’t make,” O’Dowd says “[y]ou look at some of the games we’re winning. Those aren’t just a coincidence. God has definitely had a hand in this,” and has provided long, tortured arguments for why the apparent coincidences related to his team playing can’t really be mere coincidences, and therefore God (and, one assumes, if the coincidences had worked out slightly different, that would have entailed that God is O’Dowd’s buddy as well). In other words, the Colorado Rockies win because God’s on their side.

I’m not saying this attitude is uncommon, but it’s so stunningly crazy that we have to cover it. O’Dowd will serve as our representative.

Diagnosis: Deeply delusional fanatic, but presumably a mirror of a culture rather than a driving force.
Posted by G.D. at 9:12 AM