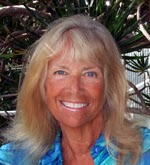 Joan Ocean comes across as a really nice but stunningly crazy lady who, according to her bio, has a degree in Counseling Psychology and is “internationally known for her work in the field of human-dolphin and whale communication.” Apparently she realized she had these abilities in the 80s when she experienced a life-changing communication between her and a whale somewhere off the coast of BC. At present she “experiences the gentle communication of the dolphins and whales as sound holography [yeah, you think you’ll get a further explanation? Good luck with that], a language that intensifies physical senses, bypasses rational-cognitive paradigms [indeed], resonates directly with our cellular intelligence, and awakens multiple levels of perception and consciousness.” Precisely (it sounds a bit like what the rest of us calls “imagination”, though the “cellular intelligence” bit is novel). Ocean is currently “regarded as an authority on the subject of Dolphin Tel-Empathic Communication, she has developed the methodologies of her work, entitled Participatory Research, in which human and cetacean species are equally conducting research with each other,” and “has dedicated her life to studying cetaceans by respectfully joining them in their natural habitats and becoming their friend and colleague.”

That’s why she has been arranging her own gatherings in Hawaii for the last ten years: The Power of Sound Conference, Dolphins and ET Civilization Conference and the Dolphins and Teleportation Symposium (described here). Yes, you read that right. The 2011 invitation is here. It is absolutely gorgeous. The symposium apparently provides the participants (including Andrew Basiago) with “momentous revelations and personal experiences of Time Travel, dolphins and our evolving paradigm for 2012 in harmony with Earth.” Now, “paradigm” is rather obviously not the only word she doesn’t quite understand in that word salad.

Ocean has determined that “the cetaceans are able to encode frequencies to resonate with our personal patterns as we swim among them in the ocean,” and the information they convey is apparently therefore “translatable by us, because they are using our own neurological fibers, non-verbal, non-cognitive, emotional programs as the medium for communication.” But we should let Ocean explain: “It is through our feelings and intuition that we are able to access this transmission. The cetaceans are advanced in the science of esoteric, multi-dimensional intelligences which include both the capacity to understand the intentions, motivations, desires and universal blueprint/patterns/sigils of others and the capacity to understand themselves in the same way.” And the upshot, you may ask (or not)? “Once we begin to experiment with this, we can access vibrational-frequency-environments that exist beyond Time. Once beyond Time, we can travel anywhere in the local Universe.” Hence teleportation. According to herself, Ocean “and the dolphins have been visiting the many futures of planet Earth and using the knowledge obtained there to awaken people to the powerful significance of their own futures and its relationship to their present lives. Implementing the teachings of the dolphins, Joan facilitates Week With Joan Ocean Seminars where people visit future worlds and parallel realities accompanied by the dolphins.”

Diagnosis: And whenever you thought you’d reached the limits of sheer crazy with, say, Gene Ray or William Schnoebelen, they prove you wrong. At least Ocean’s woo seems entirely harmless, and it’s hard to imagine that it has had a lot of impact.
Posted by G.D. at 11:33 AM