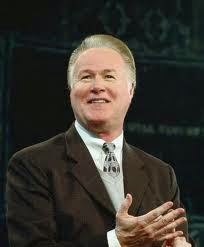 There are few good things to be said of Oral Roberts apart from the fact that he is no longer around. But the Oklahoma-based Oral Roberts University, which is by not even remotely a university, is still around, and Oral Roberts’s legacy is currently nurtured by his son Richard Roberts. Richard Roberts was for a while the president of the “university”, though God told him to resign in 2007 after some rather stunning displays of corruption and sleaze. The moral compass of Oral Roberts University is interestingly revealed by its chairman George Pearson here. I don’t think it is necessary to go into their views of science in any detail.

After resigning, Roberts focused his efforts on his father’s Evangelistic Foundation and its teachings, and the Taliban version of The Secret (the prosperity gospel), the strategy of which is to use the cover of humanitarian efforts to spread hateful religious fundamentalism to poor areas of third world countries.

Diagnosis: Forever doomed to live in the shadow of his father, Richard Roberts is certainly not doing much to fight the evil and rot of his legacy. He still seems to wield some influence, and should be considered dangerous.
Posted by G.D. at 1:47 AM