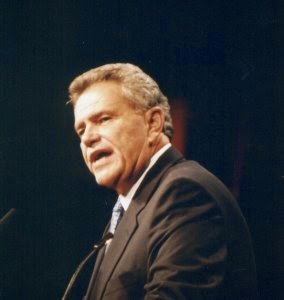 We simply cannot forego the opportunity to mention the woolly thinking of apologist and Dunning-Kruger victim Marilynne Robinson (discussed here) but that is because we are rather tired of arguments for religiously motivated borderline anti-science by touchy-feely fluff and fogbanking (“I feel meaningful, therefore God”), and author Marilynne Robinson is certainly guilty (e.g. here, or here). I am not entirely convinced I have the right to call it “lunacy”, however.

James Robison makes things kinda easier. Robison is a Texas-based televangelist and the founder and President of the Christian relief organization Life Outreach International. He originally made a name for himself with his calling out “for God’s people to come out of the closet and take back the nation,” by organizing a “Freedom Rally” at the newly-built Reunion Arena that attracted 10,000 people; apparently Robison was “sick and tired of hearing about all of the radicals, and the perverts, and the liberals, and the leftists, and the communists coming out of the closet; it’s time for God’s people to come out of the closet, out of the churches and change America.” According to Mike Huckabee, who was Robison’s communications director at the time(!), that rally was the genesis of the Moral Majority.

Robison quickly rose to become one of the more prominent leaders of the conservative religious during the early 1980s, well-known for his opposition to homosexuality and non-Christian religions, and was for a time predicted to become the next Billy Graham. For some reason he withdrew from politics in the 80s, however, but has recently returned, and as delusionally insane as ever. Currently he runs the daily and pretty successful television program LIFE Today, and sells books promoting an unhealthy mixture of snowflakey fluff and brimstone. He is also part of the spiritual warfare website The Presidential Prayer Team, which is devoted to praying for the president in its own deranged manner – after all, Robison apparently believes that Obama is controlled by Satanic lies, including the satanic lies of Karl Marx (“birthed in the pit of hell”) and the Pharaoh.

During the 2012 election campaigns Robison assumed something of a “behind-the-scenes” role for the religious right (such as Rick Perry). However, he managed to draw some attention for himself when he posted a chart from writer Wayne Grudem on how to “defeat the enemy’s plan” (i.e. Satan’s plans) in politics and “fulfill the will of God.” In the plan Robison and Grudem identified Obama’s goals and means for reaching them, such as the desired result “death of babies” to be reached through “abortion” and “moral breakdown of society” to be reached by “teaching of evolution, with implication that there is no God to whom we are morally accountable; teaching of moral relativism in universities,” and so on. According to Robison gay marriage and abortion rights are part of a “furious flood of evil threatening to destroy our nation”. Heard it before? It would be interesting to hear them explain how, for once. “All manner of evil is going to be spewed out on our nation” due to gay rights, which is a “war against creation itself”, says Robison, but once again he doesn’t go into details (that would require him to commit himself to some causal mechanisms, which he is of course not willing to do).

In 2012 Robison teamed up with Discovery Institute’s Jay Richards, known for his promotion of Intelligent Design creationism and climate change denialism, to write a new book entitled Indivisible: Restoring Faith, Family, and Freedom Before It’s Too Late on how Christians can rise up and save America, telling secularists that he was trying to save America so that they would be able to “keep preaching your nonsense,” because in a world that doesn't believe in God, “you won't have the freedom.” But Robison won’t grant the secularists “the liberty and the license to continually assault the word of God, to assault marriage, to assault family, and to literally take your secular theocracy and cram it down our throats.” That privilege is exclusive to Robison and those who agree with him. So there. And it is all about freedom. The insane martyr complex and lack of self-awareness that has led Robison to believe he is persecuted by a “secular theocracy” is discussed here.

Among political standpoints Robison seems to have endorsed the idea of David Barton, Jay Richards and Buddy Pilgrim that, because of the Bible (parable of the vineyard), employers have no obligation to be “fair” to their employees (i.e. minimum wage is often too generous, Biblically speaking), and that there is “a type of racism” growing in America against “free market capitalists” akin to the kind that they stood against along with Martin Luther King. I want readers to devote a second to assessing the level of delusional crazy exhibited by that point.

Then, of course, there are the anti-gay efforts. Satan is for instance behind the conspiracy that has organized for the show Glee to be aired on Television to bring about the end of America (also here). You can see him weigh in on the Hunger Games here (sheer, untarnished, clinical insanity). Here Robison compares fighting gay rights to helping victims of Hurricane Sandy.

Diagnosis: Ragingly, monstrously insane, to the level where it becomes a threat to coherence. But Robison is also extremey influential and must be considered very, very dangerous.
Posted by G.D. at 8:41 AM