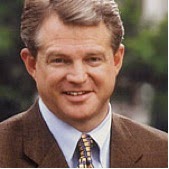 Continuing with the topic of the last post – spawn of famous fundamentalists – Gordon is the Chief Executive Officer of the Christian Broadcasting Network (CBN), the network owned by his father Pat Robertson. He is also a frequent co-host of the 700 Club and is currently producing the new CBN Superbook series that teaches children “the truth of Christ in God’s word.”

Robertson’s ideas and worldview lie close to his father’s, including commitments to the use of necromancy and creationism (though Gordon, like Pat, admits that the Earth is not 6000 years old). He has also claimed that selectively breeding strains of marijuana with higher levels of THC was contrary to the will of God, though he didn’t elaborate on the extent to which he himself observes a general prohibition on selective breeding (given that virtually any food bought in a regular store is the result of selective breeding).

Diagnosis: Given that his views are so close to those of his father it is hard to make this entry particularly exciting or surprising. But Gordon Robertson is still a mover and shaker among delusional wingnuts, and no Encyclopdia of loons is complete without an entry for him.
Posted by G.D. at 3:19 AM