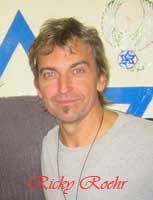 For some reason many people have recently come to more or less equate disbelief in God with critical thinking. Well, Ricky Roehr thinks that “God is a Myth”. It surely hasn’t gotten him far on the path of good rational reasoning. According to Roehr “[w]hat there are, however, are human beings who were advanced scientists who created all forms of life, known as the Elohim. You can read about them in the oldest versions of the Bible, and the oldest versions are always the less polluted versions.” Roehr is a Raëlian – leader for the North American Raelian Movement, in fact – and according to him “there’s a very important difference between most atheists and the Raëlians: We’re still Creationists! The Raëlian Movement is an atheistic religion that is preparing humanity to welcome back its true creators, the Elohim, without fear or guilt.”

Raëlians are, in short, cultists who have replaced belief in God with belief in superior extraterrestrial beings but still adhere to an almost literal interpretation of the Bible, and has developed their own intricate system of pseudoscience, including Intelligent Design, and cloning – in 2002, for instance, their “research” institute Clonaid claimed it had created a child, Eve, through clone technology (yes, Clonaid’s CEO, Brigitte Boisselier, is a staunch Raëlian), and Raëlians have continued to publish books about their successes in the field of human cloning since then. No evidence of said cloned child has been made public, of course, and the whole thing is generally considered a hoax. It is, come to think of it, uncannily similar to scientology in many ways, though it should be emphasized (given that this is an Encyclopedia of American loons) that Raëlianism originated and enjoys its main popularity base in France.

Raëlians also believe that Jesus, Muhammad and Buddha are prophets of the extra-terrestrial Elohim. The popularity of the cult may, however, be limited by their symbol, a swastika located within a Star of David.

Diagnosis: As a low-level cultist, Roehr is reasonably insane, though his cult is committed to principles that probably ensure that its popularity will remain rather limited. Probably relatively harmless, in other words.
Posted by G.D. at 12:03 PM