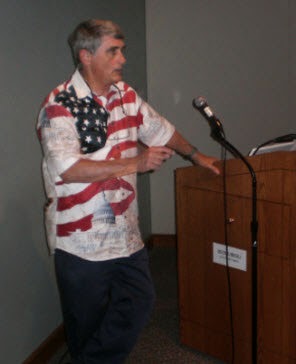 Hal Rounds is an attorney, Tea Party leader and spokesperson (Tennessee), and a wingnut’s wingnut – though, really, the whole group has to be indicted for their suggestions concerning education policy. The educational platform for Rounds and his group is historical revisionism and sanitization, and suggests in particular that history textbooks should cover up nasty things like America’s treatment of natives and slavery because it makes past leaders look like hypocrites. In other words, history should not try to depict historical events accurately – instead, it should be replaced with hagiography to ensure that children won’t be exposed to anything that could lead them to question American exceptionalism: “No portrayal of minority experience in the history which actually occurred shall obscure the experience or contributions of the Founding Fathers, or the majority of citizens, including those who reached positions of leadership,” as they put it. According to Rounds, the group wants to address “an awful lot of made-up criticism about, for instance, the founders intruding on the Indians or having slaves or being hypocrites in one way or another.” Rounds’s group doesn’t seem to have been particularly stable or significant, and seems in fact to have more or less disbanded later on. Still.

Diagnosis: Minor moron, and probably relatively insignificant, although his views on education are more widely shared than is comfortable.
Posted by G.D. at 12:06 PM