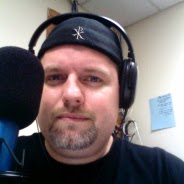 Chris Rosebrough is a fundamentalist pastor and host of the Pirate Christian Radio and the radio show podcast Fighting For The Faith. Apparently he’s something of a notorious figure among certain groups of fundies, though he hasn’t quite managed to make a big media impact beyond the inner rings of the Taliban. Still, he deserves a quick mention: Rosebrough’s anti-gay activities and positions are stock of the trade. More novel (well, reactionary) is his opposition to ordaining women priests. After all, the ministry is a boy’s club and has always been so (what about the famous female apostle Junia, mentioned in Romans 16:7? Ah, according to Rosebrough she wasreally a man as well; evidence? It sits better with his position). And as for science? “I see no evidence in scripture that humanity evolved from apes via random chance and ‘survival of the fittest’,” says Rosebrough, which is strictly speaking true but in the context suggests that he entertains a lot of other, radically idiotic beliefs.

Mildly interestingly, Rosebrough has been in some disputes with the notorious Rick Warren, in particular over the fact that Warren, who calls himself Rupert Murdoch’s pastor, has failed to call Murdoch out on the latter’s “owning, expanding and profiting from pornographic channels.” If that's your main moral concern with Murdoch, you should reconsider your priorities.

Diagnosis: Well, this is in no way an in-depth coverage; Rosebrough remains to obscure to those outside of the fundie movement. That he is a fanatic loon is not in doubt, however.
Posted by G.D. at 12:39 PM