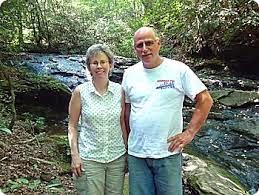 We’ll actually let Marco Rubio off in virtue of the benefit of the doubt. His pronounciations on the age of the Earth would admittedly qualify him, though one suspect opportunism rather than intellectual commitment (as one does in most of the stuff Rubio is saying or doing, in fact) – that goes for his backpedalling as well. We’ll harass the little people instead.

Gary & Lisa Ruby run the website Liberty to the Captives, a relentlessly fanatically religious website devoted to promoting conspiracy theories, woo and pure fantasy, from the nephilim to the New World Order; it isn’t one group that’s behind the New World Order, but everyone from the scientologists (here is their article “Terri Schiavo and scientology – the Death Connection”) to RaptureReady (!). It is worth a visit. They have, for instance, a section on how Harry Potter and The Lord of the Rings lure kids to practice witchcraft – as do promoters of essential oils, apparently, and prayer circles (“praying with hands clasped to form a circle is not found in the Bible. This practice, adopted by churches around the world, comes directly from witchcraft”). Indeed, even Tim LaHaye’s Left Behind series is covert promotion of witchcraft, according to the Rubys; apparently the series even promotes equipping people with microchips – how’s that for Satan worship?). And of course Obamacare is “stealth euthanasia” (as Rob Panzer says: “When patients enter hospice simply because they are elderly, weak or forgetful, it is a red flag that something definitely is not right”) – there is even a link to witchcraft in Obamacare, as demonstrated by Michelle Obama’s involvement with voodoo.

In other words, there is a simple way to sum up the theological position of the Rubys. Everyone who disagrees with them, whether it is on politics or theology, are really promoters of witchcraft and the New World Order. Christian rock? Check. No Greater Joy ministries (that’s Michael & Debi Pearl)? Indeed.

Diagnosis: You get the gist. These people should be avoided at more or less all costs.
Posted by G.D. at 12:18 PM