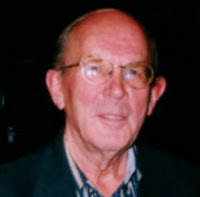 Arno Froese is the Executive Director of Midnight Call Ministry, editor of the monthly magazine Midnight Call, and author of several books, including “How Democracy Will Elect the Antichrist”. Yes, Arno Froese is one of the Rapture Ready people. According to the website “[his] book demonstrated a rare common sense approach to world events,” but they generally don’t use the expression “common sense” in the same way the rest of us do. And Froese’s articles are predictably insane; he has for instance dealt with popular conspiracy theories, dismissing them as “irrelevant and unimportant in God’s eyes,” since the end times are close anyways. He has also claimed that computers are a sure tell-tale sign of the endtimes, along with pretty much absolutely everything else. In short, he seems a little single-minded.

Diagnosis: Perhaps not a major figure, but he had to be in here. A complete and utter madman.
Posted by G.D. at 12:34 PM