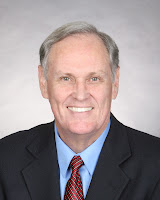 GRISDA is located on the campus of Loma Linda University, California, and the organization has a staff of seven in the “Home Office”:

L. James Gibson, the Director of the Institute, who has (apparent) research specialties in vertebrate biogeography, though does not seem to be engaged in actual research, and is a hardcore promoter of Intelligent Design Creationism and critic of theistic evolution. With one Humberto Rasi he is the author of Understanding Creation, which judiciously sums up Gibson’s lack of understanding of the topic. Gibson is also a signatory to the Discovery Institute petition A Scientific Dissent from Darwinism. Gibson’s article “Did Life Begin in the ‘RNA World?’” was a huge inspiration for Ray Comfort, who based a chapter (“From Dust to Dust”) on it in his book Nothing Created Everything: The Scientific Impossibility of Atheistic Evolution.

- Benjamin L. Clausen, who pursues research in nuclear physics, and claims that “if we don’t accept creation we have no reason to [exist] as a church,” which may or may not be correct but will hardly pass as scientific evidence.

- Raul Esperante, who is into paleontology research, and actually does some real work. Interestingly, none of his real research supports creationism, but it does of course lend an air of legitimacy to his creationist rants.

- Ronald Nalin, who does research on limestone sedimentology in Italy.

- Timothy G. Standish, who does “research” in molecular biology (though his “research” seems to be limited to writing articles for Origins and similar creationist publications), contributed to Dembski’s Phillip Johnson celebration volume, and is – surprise – also a signatory to A Scientific Dissent from Darwinism as well as on the CMI List of Scientists Alive Today Who Accept the Biblical Accountof Creation. Standish is primarily known for his abilities to pack more wrong into a single paragraph than virtually anyone else.

The institute allegedly sports “branch offices” in France, Argentina, Mexico, South Korea, and two in Brazil, and they publish several magazines promoting various incarnations of bullshit. In fairness, some of these people do actual field research, and some of the research is not obviously horrible (notably the research that doesn’t support their creationism), but their general agenda is certainly not based on such activities. You can find some criticism of their desperately fallacy-filled denialism here.

Diagnosis: Another entry, another slew of denialist fundie morons. The Institute pushes its creationism pretty ardently, and seems to have some impact.