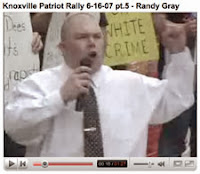 Randy Gray was, for a while, a Michigan precinct GOP delegate, but lost that position after he protested the election of Barack Obama with a sign at a busy intersection dressed in his KKK robes. According to Gray, he was exercizing his First Amendment rights, saying “I feel white people feel more oppressed [that’s a double “feel” qualifier]. We’re basically told as white people we can’t have any organizations. We’re ruled by communists.” It is worth pointing out, then, that it was the GOP who had him expelled. He has later appeared at various neo-nazi rallies. It is worth noting that the Gray incident does represent a recurring problem (take, for instance, the Jim Russell case here)

Though officials claimed not to know about Gray’s background, Gray had previously twice been kicked out of city council meetings for protesting the city's permitting process in relation to a Klan protest against the Martin Luther King holiday.

Diagnosis: Gray is a loon, of course, but the really disconcerting piece of lunacy here concerns those – and there has to be quite a few of them – who elect people like Gray. And it doesn’t only happen in the areas of the US in which you’d think it was most likely either.
Posted by G.D. at 12:29 PM