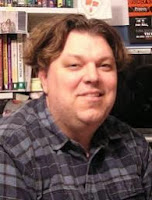 Jeffrey Grupp calls himself a “Buddhist and postmodernist philosopher from Ann Arbor, Michigan”, and is a regular on such erudite shows as “Coast to Coast AM” with George Noory, and “Infowars”, where he presents concepts such as “telementation”, the “idea that a deep feeling state inside you can alter reality in ways that you want,” similar to the Law of Attraction. He does, in fact, have a formal education in philosophy, though despite the “Dr.” title that appears on several of his youtube videos he doesn’t appear to have defended his thesis “Quantum Deleuze” yet. He has written the book Telementation: Cosmic Feeling and the Law of Attraction, as well as Corporatism: The Secret Government of the New World Order, however, but that isn’t quite the same.

His focus is the topic of the latter book, namely to be a libertarian conspiracy theorist of the most extreme kind there is. His main concern is the New World Order and the shadowy organization behind it, such as the Federal Reserve, Codex Alimentarius, the North American Union, the WTO and IMF – and all the FEMA concentration camps set up all over the US to incarcerate freedom advocates like himself. In addition, he is worried that the patriot movement is being hijacked by plants of the shadowy organization such as Glenn Beck and Ann Coulter: “The New World Order wants worldwide rioting, mass death, economic collapse, sacrifice of lower minions and freemasons of the New World Order, compliance with the climate change (http://rationalwiki.org/wiki/Climate_change_denial) laws and servitude, and a set up of a Brave New World, all over the course of the next decade or decades.” He even has “proof” that the New World Order wants to use the Truth Movement and similar movements to subvert its critics; in 2009 some news agencies said that a Pittsburgh police shooting “was due to the shooter listening to the words of Glenn Beck and Alex Jones.” So there. The fact that someone in the media said this is virtually solid proof that there is a conspiracy against Alex Jones. As solid as French postmodernism with a dose of quantum thrown in, on surmises. The logic is indeed impeccable; similar things have happened before: “After World War II, we were told that the war was caused by the mass madness of the world citizenry, not by the New World Order, and thus Truman had to set up all those mental health acts that he did in order that We the People could be cured of our irrationalism.” I think a standard Philosophy class on critical thinking would have told Grupp that a weak analogy based with a piece of your imagination fails to be considered particularly compelling evidence by most people, but Grupp might have been absent that day.

So as you see, the conspiracy is pretty much all-pervasive, and it’s good that we have people like Grupp who sees through it all. He seems, indeed, to be supporting more or less all of these, including how “the New World Order is going to make our Truth and Patriot movements their primary tools of operation to carry out Eugenics and so forth,” and in particular to target the all-time hero of freedom-loving people, Alex Jones.

Diagnosis: Astonishingly crazy and astonishingly paranoid, mixing wingnut paranoia with post-modernism, quantum woo, and the Law of Attraction. You can’t top this one. Possibly a poe.
Posted by G.D. at 2:06 PM