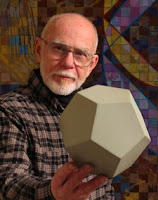 There is no delusion so weird and wrong that no crackpot will get obsessed with it, write book about it, and in the end presuppose its accuracy. In fairness, Sacred Geometry has a long tradition, but silly hardly comes sillier than Sacred Geometry. According to Charles Gilchrist “Sacred Geometry is the eternal visual language wrapped around the root concepts of the manifest universe. The archetypes and icons of geometry are absolutely perfect, unchanging, and timeless realities springing directly from God Mind [sic].” And, without really trying to explain the connection, “[t]he Universe is Vibration, and the principles of Sacred Geometry are directly correspondent to ALL wave form phenomena … ALL vibration. Science agrees, the Universe Is Vibration, and geometry IS vibration manifest on the visual, time/space plane.” Try to explain what that means, you narrow-minded skeptics. It is at least worth observing that Gilchrist does not seem to mean by “Science” what we ordinarily mean by “Science”.

But what are those sacred geometrical forms, you may wonder. Well, you just have to check out his website. It is a bit hard to put into words, but at least the most fundamental sacred geometrical shape is the single point: “The Single Point is the first archetype of Sacred Geometry. The Single Point is the absolute root mental concept . . . the simplest idea possible. [It] is directly related to unity consciousness or Oneness … undivided God Mind. The Single Point is literally The First Dimension [uh, no] … the omnipresent – omnipotent center [give that some thought, will you]. Single Pointedness is the root of all holistic thinking … THE ALL IS ONE. Single Pointedness (Oneness) is that which is beyond Duality.” That should make it clear, I suppose, and make you ready to ascend to other sacred shapes such as the two points (“The great and profound mystery of Sacred Geometry: The Single Point magically divides and becomes The Two Points”), the radius (“All the various energies of the universe trace to the play between the Radius and the Arc. The Radius/Arc is Yin and Yang … Light and Dark … Left and Right … East and West … Up and Down … Mother and Father … etc.”), the circle, two circles of common radius, the Vesica piscis, two new points, and four circles of common radius (“… the essence of family revealed in Sacred Geometry: Parents (circles 1 & 2) and children (circles 3 & 4), the family heart in the form of a petal. [It] is THE germ form of The Creation Pattern, as all of the necessary forms are now in place.” Gilchrist is also into Mandalas and Prayer Wheels because these have something to do with circles.

Diagnosis: A marvelous (and harmless) fellow who manages to achieve the impressive feat of making every single sentence he writes not even wrong, even the ones that we may charitable deem minimally grammatical.
Posted by G.D. at 12:19 PM