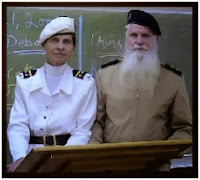 A.k.a. James & Deborah Green
A.k.a. The Generals

Jim and Lila Green are the founders of The Aggressive Christianity Missions Training Corps (ACMTC), also known as the Holy Tribal Nation, the Free Love Ministries, or the Life Force Team. As the name suggests this is a Biblicist, theocratic community. It was founded in 1981 with a pseudo-militaristic structure (still maintained), in which any order given by the Greens to people (including children) who join the group is expected to be obeyed.

The foundation of their paramilitaristic cult ministry in the early 80s, complete with logos and uniforms and promoting “aggressive Christianity”, soon – and predictably enough – led to a series of lawsuits and standoffs with the police, given the Greens’ tendency to keep people locked up for months as punishments, and taking children away from parents (even, in some cases, throwing the parents out of the ministry while keeping the children). Their response to a 1980s lawsuit, in which a woman was kept in isolation for months due to “spiritual adultery” (she was accused of placing her family and children above God in her life) was: “God told us to not go, so we didn't go. Just as the Bible says in 1st Corinthians 6:7 in the Amplified Bible, ‘Why, the very fact of your having lawsuits with one another at all is a defect (a defeat, an evidence of positive moral loss for you). Why not rather let yourselves suffer wrong and be deprived of what is your due? Why not rather be cheated (defrauded and robbed)?” That response is not particularly indicative of sound mental health, and the Greens lost the case. It was not the last time the Greens were accused of various crimes against other cult members  Of course, the Greens responded to the aforementioned loss by going more aggressive and upping up their missionary work.

As for theology, they used to present their views in a daily Sacramento radio program, The Battle Cry, which called on listeners to prepare for a war against Satanic forces, whom they said were behind everything from psychoanalysis and karate to fairy tales, and even caused colds. You can probably figure out yourself how ACMTC stands on religious tolerance, religious diversity, Islam, and homosexuality.

Diagnosis: The ACMTC is one of many extremist cults, and it is hard to say that it is necessarily much worse than the others. Their influence is probably limited, but they are insanely crazy, and not above ending up doing something really stupid. Vigilance should be maintained.
Posted by G.D. at 12:35 PM